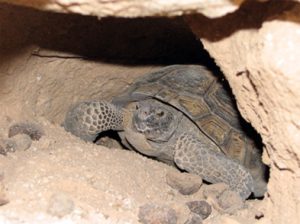 A turtle in the desert

During the Triassic period (about 248 to 199 million years ago), most of Earth’s land continued to stick together in one big supercontinent, Pangaea. Because the middle of Pangaea was so far from the oceans, it was very dry there, like a desert. The whole world was generally pretty warm all through the Triassic period. Even at the North and South poles, there wasn’t any ice.

Because it was warm and dry, the older plants like giant ferns didn’t do well in the Triassic. They needed wet ground for their spores to make new plants. Most of the ferns died out, while the new pine trees took over as the main plants on Earth, even at the North and South poles. Ginko trees also developed, and possibly the first flowers 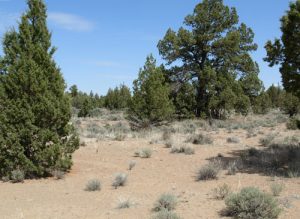 But at the very end of the Triassic, about 200 million years ago, the warm-blooded reptiles evolved into the first flying reptiles – the pterodactyls. Oreptirethers evolved into the first mammals. Another catastrophe that killed many types of plants and animals about this time (possibly because of big volcanic eruptions as Pangaea began to pull itself apart) marks the transition to the Jurassic period.

Learn by doing: go see a dinosaur skeleton in a museum
More about the Jurassic Era

Bibliography and further reading about the Triassic period and geology: