What is salt made of? Geology 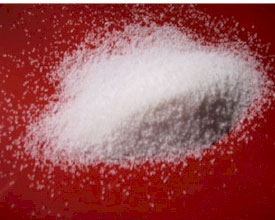 Salt molecules are a combination of chlorine atoms and sodium atoms. These atoms mix together easily and, once they are mixed, the salt molecule is very stable and doesn’t break apart easily. There is salt on meteors in outer space and on Mars, and probably on lots of other planets too. Probably most of the chlorine atoms and sodium atoms came to Earth separately from space and later combined together to make salt. This salt formed on and inside sedimentary rocks, and as water ran down to the oceans, the salt dissolved in the water and went down to the oceans too.

Since about 4.4 billion years ago, when the oceans first formed, they have been full of salt water. Most of the salt on Earth is dissolved in the oceans. Even the salt that we find underground in mines usually got there because an ocean used to be in that place and then dried up as the climate changed.

Because the oceans are so salty, they don’t freeze as quickly as fresh water does. Water normally freezes at about 32 degrees Fahrenheit (0 degrees Celsius). But salty water only freezes when it gets colder than that – how much colder depends on how salty the water is.

All living things got started in the ocean, so the inside of cells – the cytoplasm – is mostly made of water and salt, just like oceans. Because of this, all living things need a little salt to survive. On the other hand, living things need just the right amount of salt – if they get too much salt, they try to wash the salt out of their body with water, and this dries them out and kills them.