What is cytoplasm? Parts of a cell – Cell Biology 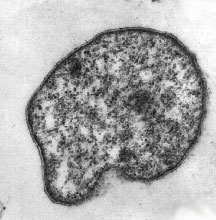 What is cytoplasm? A very simple cell (seen through a microscope)

Inside all cells, from the most simple to the most complicated, there is cytoplasm. Cytoplasm is what all the rest of the stuff inside the cell floats in.

Parts of a cell
Evolution of cells
All our biology articles

Originally, cytoplasm was just the sea water that was inside the lipid membrane bubble when it first formed. Because all cells lived in sea water, it didn’t really matter whether the water flowed in and out of the cell membrane. The sea water was the same inside and outside the cell anyway.

What’s a lipid membrane?
What are lipids?

Plant cytoplasm. You can see the chloroplasts floating around in it.

For most cells, that’s what cytoplasm is still today. Even inside plants and animals that have never been near an ocean, cytoplasm (SIGH-toe-plaz-um) is still a lot like sea-water, because that’s what the mitochondria, chloroplasts, DNA molecules, and other things that live inside a cell need to survive.

What are mitochondria?
Plants and chloroplasts

What is cytoplasm made of?

Like the oceans, cytoplasm is mostly made of water and salt. Today we have to drink water and eat salt in order to make our own tiny oceans inside our cells.

Where does salt come from?
More about water

And our cell membranes have to be careful to keep the right amount of water and salt inside each cell (though cytoplasm isn’t as salty as sea water).

Cytoplasm in eukaryotes also has other molecules in it that the cells need. We call these molecules enzymes.