What is a sponge? Porifera, Evolution, and Biology 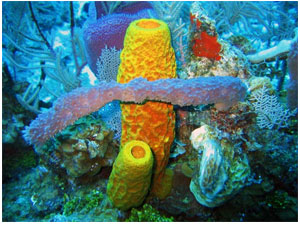 A group of brightly colored sponges in the ocean

Probably the first creatures with two cells formed by accident, when one cell was dividing to make more cells and the new cell happened not to detach completely from the old cell. Then these cells found that there were advantages to sticking together – maybe they were too big for other cells to eat, or they were able to use a root to stay in one place, near a good source of food.

One problem that any multi-celled creature has to solve is how to get food to all of the cells. All of the sponges lived in the ocean, like all other living things at this time, so the food normally just floated by and the cell pulled it inside through its lipid membrane. If you made a long chain of cells, each cell could still touch water and get food. A flat surface two cells thick also would work, or a cylinder of cells two cells thick, which is basically what a hydra is.

Sponges (Porifera) solve this problem by having lots of holes all through their bodies, so no cell is ever out of contact with the water that flows through them. As the water flows near each cell, the cells engulf and eat the bacteria in the water.

Even though sponges can get to be pretty big, they have no internal organs – no hearts or stomachs or brains. Sponges do have specialized collar cells that pump water in and out of the sponge, so they get more food than they could by just relying on water currents. Many sponges also make a hard substance out of calcium crystals or collagen that helps to hold them up, like our skeletons do for us, but unlike our bones the hard supports inside sponges are not alive. Most sponges are asymmetrical, but some have radial symmetry like flatworms.

Pieces of sponges can survive on their own; they can break off and float away and grow into a new sponge. But sponges can also reproduce sexually. They make sperm and release them into the water, where they meet up with sponge eggs to create new baby sponges. (All sponges can make both sperm and eggs.) Because any sponge cell can become any specialized sponge cell, sponges can in theory live forever.

Learn by doing – Looking at a Sponge
What about Flatworms?

Bibliography and further reading about sponges: