What does a stomach do? – Digestion and Evolution 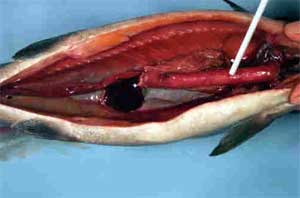 The first multi-cellular animals like hydras had no stomachs, or you could say they were all stomach, because they were shaped like a bag. Roundworms, a little later, were shaped like a tube, and the cells along that tube made mucus to protect the tube from the bacteria that digested food inside the tube.

But about 542 million years ago, in the Cambrian period, arthropods like spiders and millipedes developed more complicated digestive systems. That included a stomach, and most of the animals that have evolved since then also have stomachs, like you.

A stomach lets you get more energy out of the food you eat. After the chewed food goes from your mouth down your esophagus to your stomach, it stays in your stomach for a while instead of going on to come out as poop right away. In your body, your stomach is right under the bottom part of your ribs, on your left side. Your stomach is made of specialized cells. These cells are different from other cells in your body because they make a lot of hydrochloric acid out of hydrogen and chlorine atoms, and then they push that acid out of themselves and into your stomach.

Other stomach cells make digestive enzymes and push them into your stomach too. The hydrochloric acid and the enzymes react with the food in your stomach and break it down into smaller and smaller bits. Your stomach also squeezes the food around to grind it up before sending it down to the intestines.

Having a stomach pre-digest the food before it gets to your cells makes it easier for your cells to break down that food and turn it into energy. Since they don’t use so much energy breaking down the food, the cells end up with more energy overall. Animals can use this energy to move around more than roundworms or hydras do, and also to run bigger brains so they can be smarter. Being able to digest food more slowly in the stomach also lets you take a longer time between meals.

Bibliography and further reading about stomachs and digestion: