What are arthropods? Biology 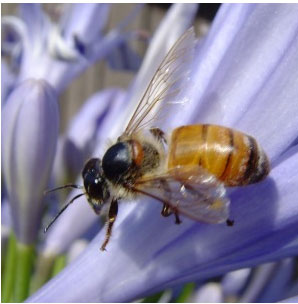 Bee on a flower

Insects, spiders, crabs, and lobsters are all arthropods, so there are a lot of arthropods on Earth.

Annelid worms
All our biology articles

When were the first arthropods?

The earliest arthropods on Earth developed about 550 million years ago. That was during the Proterozoic period.

What came before arthropods?

Arthropods’ ancestors were a kind of worm that was divided into segments, probably distantly related to annelid worms. These worms probably had two antennae on their heads, and a pair of eyes. They probably had several head segments, at least one body segment with several pairs of legs, and a tail segment.

Then these worms developed hard exoskeletons and became the arthropods. This hard shell protected them and helped them to survive. But their shells don’t grow along with them, and so all arthropods have to shed their shell as they get bigger and grow a new one.

Because of this most arthropods don’t get very big. Most of them are tiny insects or spiders, although some crabs and lobsters can weigh up to about twenty pounds. 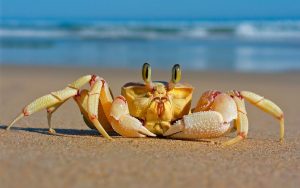 A crab on the beach

About 530 million years ago, some of the arthropods – small insects and spiders – left the ocean and tried their luck on land.

The small insects ate moss, and the spiders ate the insects. Arthropods were among the earliest creatures to leave the oceans. But many other arthropods stayed mostly in the ocean, like crabs and lobsters.

More about moss
What about mushrooms? 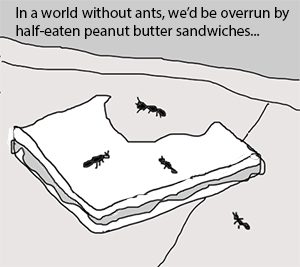 Around 350 million years ago, some of the insects living on land began to fly, like modern flies or dragonflies or grasshoppers.

Flowers and grasses
What is pollen?
More about bees 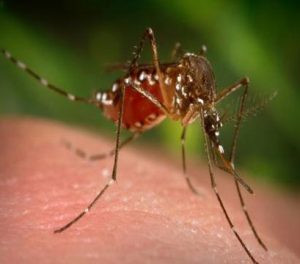 A mosquito on human skin

Bees and ants soon also evolved to cooperate with each other to build big hives or anthills. Just as it has for humans, cooperation has been a very successful evolutionary strategy for insects, too. Mosquitoes also evolved about this time: they eat pollen, but female mosquitoes also suck blood, first from reptiles and later from mammals. They spread malaria by biting people, though they don’t mean to.

Where did ants come from?
What do mosquitoes do?
More about malaria

Today, more than eight out of ten living creatures with more than one cell are arthropods. But that’s still not nearly as many as there are bacteria and viruses.