What is a virus? Evolution and biology 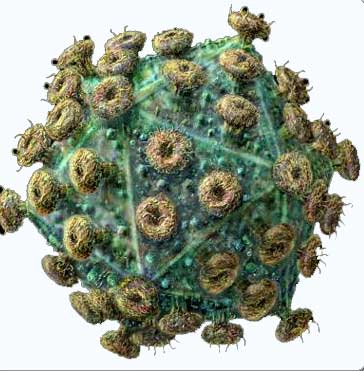 Nobody is quite sure whether viruses are living things or not. The first living things may have come from viruses. But it’s also possible that viruses evolved from living cells and got gradually less complex and more dependent on their hosts to live. We don’t know whether there are any viruses anywhere in the Universe except on Earth – we have never found any evidence of any. We don’t really know when viruses got started, either. It was probably at least two or three billion years ago, when the only life on Earth was one-celled bacteria.

A virus is very small. It’s much smaller than a cell. It can’t survive for long on its own, but only inside the cells of living creatures – bacteria, plants or animals. A virus is just a few molecules of DNA or RNA, wrapped up in a layer of protein molecules to protect it.

Some viruses are shaped like spirals, others like soccer balls. A few big viruses combine both forms, so they have a soccer ball shape with a spiral tail. Some viruses can also steal bits of the cells they invade and make an extra protective wrapper out of the bits.

Viruses make more viruses by using a living cell to do their work for them. A virus uses its DNA to convince a cell to make more of the virus’s proteins and DNA. Those become a new copy of the virus. Sometimes this process kills the cell, and other times it doesn’t, depending on what kind of virus it is. But generally it is not good for a cell to have viruses in it. We call the damage this does a disease or sickness. Different kinds of viruses cause different sicknesses: a plant virus causes rose mosaic disease, for example, while an animal virus causes rabies. Human viruses cause ordinary colds, influenza, chickenpox, and also dangerous diseases like smallpox and AIDS. Nobody knows how to cure diseases caused by viruses, but we can prevent some of them using vaccinations.

One way to think about viruses is that they are like sperm for an animal or person. They contain basically only the necessary DNA molecules for the organism. Then when the virus gets inside a cell, it develops into a bigger organism we call a virus factory, using the cell’s material to build itself. That virus factory then makes lots of new viruses, just like the new baby grows up to make new sperm, and they go out into the world to reproduce themselves again. While the virus is in the form of a virus factory, it can even be infected itself by smaller viruses, and the smaller viruses can make it sick.

Bibliography and further reading about viruses: