What is RNA? Cell biology and evolution 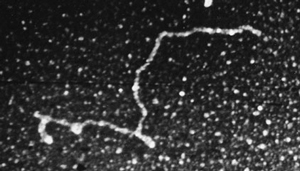 RNA molecule: A single strand of RNA, seen under an electron microscope

The RNA molecule was probably one of the earliest steps towards life on Earth. RNA is short for “ribonucleic acid”. That’s a very long, complicated molecule made out of amino acids linked together. The amino acids are made out of atoms of carbon, hydrogen, and a few other elements.

The beginning of life on earth might have been something like this. When the planet Earth first formed, about four and a half billion years ago, amino acids from space were among the molecules that formed the Earth.

RNA was different from amino acid or purine or pyrimidine molecules in three very important ways.

Model of an RNA molecule

The way RNA reproduces is that each molecule of RNA is shaped like a spiral staircase with one side missing. The spiral of the staircase is made mainly of carbon and oxygen atoms (also some phosphate atoms). Sticking out from this vertical part are lots of horizontal steps. Each step is made of one of the four purines and pyrimidines: adenine, guanine, cytosine, or uracil.

When the RNA runs into loose purine or pyrimidine molecules, they join up to the steps of the staircase. Each molecule matches up to the ones that are already there. Then they connect themselves together with carbon and oxygen atoms to make the other side of the staircase. Finally the staircase splits apart like opening a zipper, making a new RNA molecule.

An RNA molecule makes a protein and lipids in the same way. It matches some of its purines or pyrimidines with other loose molecules that happen to be floating around. Originally, the RNA probably did this on its own, in the oceans. About three and a half billion years ago, RNA began to build proteins inside prokaryote cells. Then about one and a half billion years ago, when eukaryote cells evolved with specialized parts, the RNA began to do its work of building proteins and lipids mainly inside the endoplasmic reticulum.

Learn by doing – RNA model building
The next step in the development of life: DNA

Bibliography and further reading about RNA: