What are lipids? Cell biology 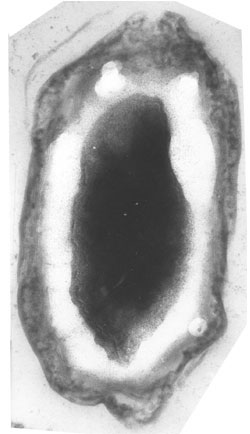 Highly magnified view of a cell wall made of lipids

When did the first lipids form?

What are amino acids?
The Hadean Eon
How old is the Earth?
All our biology articles

What are lipids made of?

What are hydrocarbons?
More about molecules
All our chemistry articles

Why do lipids tend to form membranes?

A lipids project: oil and water

Even better, the molecules can sometimes form a hollow sphere of molecules, with a space inside it (It looks like a circle in the picture because you are looking down at it from the top). That way the water-loving ends are all touching the water, but none of the water-hating ends are.

Why do lipids form bubbles?

A more complicated, but even better arrangement for the molecules, is to form a membrane two layers thick, so that all of the water-hating ends are safely enclosed, with the water-loving ends coating the outside *and* the inside of the sphere. That way, even if the sphere is full of water, the water-hating ends still don’t touch any water. The whole sphere, or bubble, is still too small to see, and only two molecules thick.

These lipid membrane molecules, also, could move apart a little bit to let water or other molecules, like proteins, in or out of their bubble. Check out this experiment to see how that works.

A project with soap bubbles
What are proteins?

From lipid membranes to living cells

In many ways, these lipid membrane bubbles were a lot like living cells, but they were not alive. In order to become alive, the membranes had to combine with RNA or DNA to make living cells.

What is RNA?
DNA molecules
How did cells evolve?

More than a billion years later, some cells began to use lipid membranes to make specialized parts for the cell. Lipid membranes make the outside of cell parts like the nucleus, the endoplasmic reticulum, the golgi bodies, the lysosomes, vacuoles, mitochondria, chloroplasts, and eyespots.

Parts of a cell

Learn by Doing: An experiment with oil and water
The next step to living things: cells