What is a vacuole? Parts of a cell – Biology 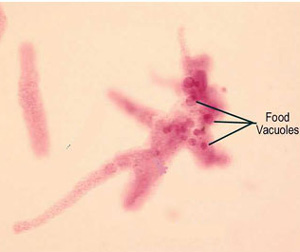 Vacuoles in an amoeba (a one-celled eukaryote)

Vacuoles are little pockets in the cytoplasm of a cell where a cell stores food. You can see them with a good light microscope. Vacuoles are mostly made of water and amino acids.

They have a lipid membrane around them to keep out the salty water of the cytoplasm. Simple cells and prokaryotes generally don’t have vacuoles, so vacuoles probably evolved along with the first eukaryotic cells around two billion years ago. Probably they started out when part of the lipid membrane around the cell folded in and then pinched itself off to form a new little membrane inside the cell. Cells that used extra energy to make vacuoles survived better, because they could use the vacuoles to keep the cell healthier.

A video showing a paramecium forming vacuoles and ejecting waste

The way the DNA in the nucleus tells the cell to put something into a vacuole is by using enzymesas messengers. The cell can use the vacuole to get rid of things it doesn’t want. To do this, the cell puts the garbage inside the vacuole. Then the vacuole moves over to the edge of the cell, and merges with the cell membrane. Once it has a door to the outside, the vacuole opens up and spits out the garbage, and then it seals itself up, and separates from the cell wall again.

Learn by Doing – Soap bubble project
Parts of a Cell