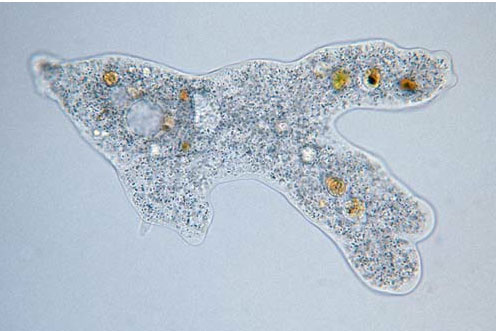 How do cells get energy?

All cells have to have some way to get energy from outside themselves, or they will starve to death. The earliest, simplest cells, about 3.5 billion years ago, got their food by drifting around in the ocean until they came to a molecule of protein or another hydrocarbon. Then they let that molecule into the cell through the cell membrane. Many cells still get their food this way today.

How did cells evolve?
What is a molecule?
Cell membranes
All our biology articles

New strategies to get food

But starting around 3 billion years ago some cells used different strategies to get food. Sometimes the different strategies were not helpful, and those cells died. One new strategy helped many cells get more food. These cells bent their cell walls, curving them in and out to make long arms. Then they could encircle the food with their arms and keep it from getting away.

How do enzymes help?

Some cells also started to make enzymes inside themselves that could react with bigger molecules, or even other cells. Cells used the enzymes to break down big molecules into small molecules that the cell could use. At first, the cell encircled its food with its arms and then spat out the enzymes into the ocean water to break down its food outside the cell.

What is an enzyme?

But this strategy was risky – sometimes the food floated away anyway before the cell could eat it. Successful cells began to encircle their prey completely with their arms to keep it from getting away.

Then, about 2 billion years ago, a few eukaryote cells began to break off that bit of cell membrane and let it form a little bubble inside the main cell membrane, so that the food was inside the cell completely and the cell could eat it whenever it wanted to, or even store it for later. We call these bubbles vacuoles.

What’s a eukaryote cell?
What are vacuoles?
A project with vacuoles

Once the food molecules were trapped inside the vacuoles, the cell could break the molecules apart to release the energy that held them together. Generally the part of the cell that began this process was the lysosome.

What is a lysosome?

More about lysosomes
Tay-Sachs disease
What are mitochondria?

From the lysosome, these smaller molecules then moved to the mitochondria, where the mitochondria used other enzymes and oxygen to produce more chemical reactions to break up food molecules and release energy that the cell needed.

Learn by doing: a project with lipids
More about lysosomes
And more about mitochondria
More about enzymes