What are mitochondria? Parts of a cell 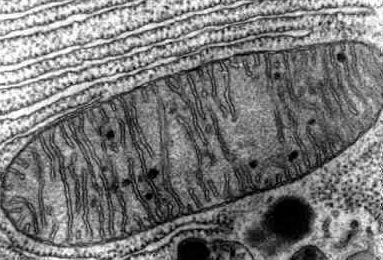 A mitochondrion (seen through a microscope)

When did mitochondria evolve?

About two billion years ago, in the Proterozoic, there were only prokaryotic cells on Earth. Mitochondria probably started out as independent cells that were especially good at digesting food. These cells were extra good at digesting because they had evolved to have two membranes.

What is a prokaryote?
Evolution of cells
Lipid membranes
More on the Proterozoic
All our biology articles

The inside membrane, instead of just forming a circle or an oval, went back and forth in a much more complicated shape. You can see here it in the picture. All those thin lines across the mitochondrion are the inner membrane. A mitochondrion is between 1 and 10 micrometers long – it takes at least 1000 mitochondria to be a millimeter long.

Mitochondria were also especially good at digesting because their DNA produced special enzymes. These enzymes used oxygen to break down sugars to make energy for the cell. In the Proterozoic, oxygen, produced by photosynthesis, had just recently appeared in Earth’s air in large amounts.

What are enzymes?
What is photosynthesis?
And what is DNA?
More about hydrocarbons

Using oxygen to break down the food molecules releases about thirteen times as much energy as when the cell digests food without using oxygen, and that’s a big advantage for any cell. Mitochondria take in hydrocarbon molecules and oxygen and put out carbon dioxide and water and energy.

Mitochondria captured by other cells 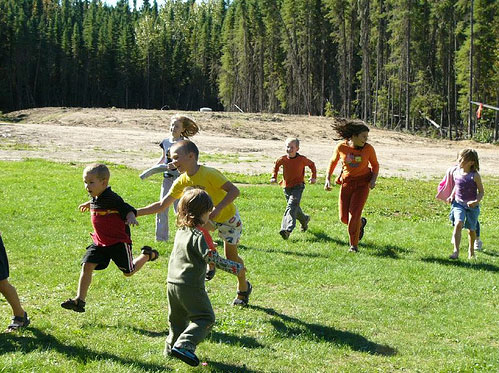 Children playing a running game: you get this energy from your mitochondria

Eukaryotes and the parts of a cell
History of slavery

What do mitochondria do inside your cells?

Mitochondria, though, like enslaved people or animals, are still basically looking out for their own interests, not yours. They still have their own DNA and reproduce themselves. They don’t know that they live inside a big living creature, and they don’t care. Your cells are just a nice place to live that has a lot of food. They just hang out inside cells – inside your cells! – waiting for the lysosomes to send them some food, and digesting it, and spitting out energy. When there’s more food available, they reproduce faster.

What are lysosomes?
What are proteins?

Some cells that need to digest a lot of food because they use a lot of energy, like muscle cells, have thousands of mitochondria inside them. But the bigger cell is still in charge. If there get to be too many mitochondria in a cell, those same lysosomes can surround the mitochondria, break them into pieces, and recycle their proteins and lipids to make new cell parts.

Is it more of a cooperative?

Maybe instead of seeing this as slavery, we can choose to see it instead as a cooperative: people are made up of billions of living creatures, cells and mitochondria and viruses and mites, which specialize and cooperate to the advantage of them all.

Learn by doing – mitochondria and exercise
Parts of a Cell

Bibliography and further reading about mitochondria: