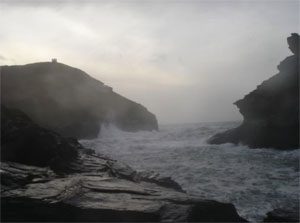 Earth’s atmosphere: Did the Earth look like this right after it cooled down?

What is the atmosphere?

The atmosphere is the air that is wrapped all around a planet.

Read more about planets
Why is the sky blue?
All our physics articles

Do all planets have atmospheres?

How does gravity work?
What is mass?

Why is the air thinner higher up?

Because the force of gravity is stronger near the planet and gets weaker as you get further away, the atmosphere is thicker close to the ground and gradually gets thinner as you go further out into space. There is no sharp edge to the atmosphere. It just gradually becomes space.

How did Earth’s atmosphere form?

More about how the Earth formed
More about the Hadean Eon 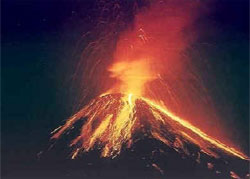 A volcano in Costa Rica

Soon after that, about 4.4 billion years ago, the Earth cooled down a lot. But there were still a lot of volcanoes that shot out steam, carbon dioxide, and ammonia. This created a new atmosphere made mostly of carbon dioxide and water, with some nitrogen. You wouldn’t be able to live breathing that.

What are volcanoes?
What is carbon dioxide?

How did oxygen get into Earth’s atmosphere?

About three billion years ago, early prokaryotic cells, one of the earliest forms of life on Earth, began to use photosynthesis to get food for themselves. They made their food out of what was available – sunlight, carbon dioxide, and water. And they excreted (pooped out) what they didn’t need – mainly oxygen.

At first most of these oxygen atoms bonded with other atoms to form molecules. We can see this early oxygen in old rocks, where about three billion years ago the iron in the rocks begins to be red from combining with the oxygen in the air (rusting).

More about the Archaean Eon
What are prokaryotes?
How does photosynthesis work? 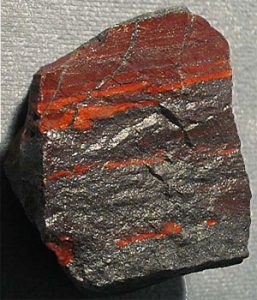 Iron that has turned red because of oxygen in the air

More about the Proterozoic Era

All this oxygen poisoned many kinds of early cells and they died off. They weren’t able to live with so much oxygen in the air.

What is the ozone layer?

But other cells evolved to use oxygen for their energy. These new cells also benefited from the development of an ozone layer. The ozone layer is a sort of blanket of one kind of oxygen high up in the sky that keeps most of the Sun’s ultraviolet light from reaching the Earth and causing sunburns.

How does ultraviolet light hurt us?

How has the atmosphere changed since the Proterozoic?

More about the Carboniferous period

The atmosphere in the time of the dinosaurs

Then carbon dioxide went up again, so that about 100 million years ago, the atmosphere was about 3% carbon dioxide. Big forests of giant ferns grew up because of all the carbon dioxide in the air. The Earth got so warm that dinosaurs could live near the South Pole. Oxygen levels have also gone up and down over the last two billion years. But nobody really understands those changes yet. Scientist are still working to figure them out.

More about the dinosaurs
The Cretaceous period

What is in Earth’s atmosphere now?

Today, Earth’s atmosphere, or air, is about 78 percent nitrogen (mostly from the ammonia shot out by volcanoes), 21 percent oxygen (from photosynthesizing cells, mainly one-celled algae in the ocean), and less than one percent each of argon, carbon dioxide, and water.

But people are burning a lot of oil and coal that are made of carbon. So we are releasing a lot more carbon dioxide into the air. The percentage of the atmosphere that is carbon dioxide is going up. Right now the percentage of carbon dioxide is higher than it has been any time in the last 650,000 years (since the earliest humans were beginning to leave Africa and travel around the Earth), and it is still going up quickly. This will cause the Earth to get warmer. Nobody knows exactly what this will mean for plants and animals on Earth, or for us.

Need a second source? Check out this page from NASA.