Why does earth have weather? – Earth Science 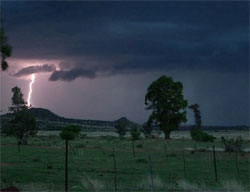 A thunderstorm in South Africa

The weather on Earth happens because of the evaporation and condensation of water, and because of the spinning of the earth and the tilt of the earth on its axis. Does it seem strange that such quiet things could cause big thunderstorms and huge waves and blizzards? Here’s why.

Because the Earth is tilted on its axis, the northern and southern parts of the Earth are sometimes closer to the Sun and sometimes farther away. This causes the seasons – spring, summer, winter, and fall. In the winter, if you are far enough north or south, it gets cold enough for rain to fall as snow. In the summer, if you are close to the equator, it gets warm enough to warm up the ocean and cause hurricanes and typhoons.

A hurricane in Cuba

Because the Earth is spinning at the same time, the air doesn’t flow straight north or south, but twists to the east or west. Air that is going towards the Equator twists to the west. Sailors call these winds the Trade Winds, and they’re the winds that Columbus used to sail to North America.

Further north, or further south, the winds blow mainly to the east, instead: sailors call these winds the “westerlies”, because they come from the west. Sailors used these westerlies to sail back to Europe from North America, or from Europe to Australia and New Zealand. Then at the North Pole and the South Pole, the winds blow mainly to the west again, and sailors call them “easterlies.”