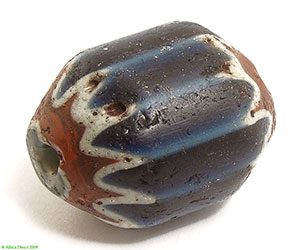 Just about 1500 AD, many, many people in North America began to die from mysterious diseases like smallpox and measles that nobody in North America had ever seen before. Soon people saw that they were catching these diseases from European sailing men who had come to the Atlantic coast to trade knives and beads for furs. But even though people were careful not to touch the Europeans any more, or even let them on shore, they still kept catching the diseases. The diseases spread even to the Navajo and the Chinook and other people who had never seen a European, all the way on the other side of North America, and they died too. Soon Spanish invaders in Mexico began to spread these diseases directly along the Pacific coast and into what is now Texas. 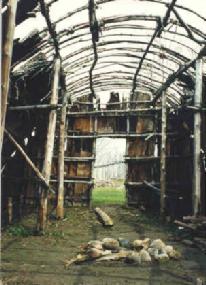 By 1650 AD, so many people had died that North America was like a land full of ghosts. Empty houses stood in empty villages. French, English and Spanish traders saw that the Algonquin, the Iroquois and the Cherokee and the Mississippians and the Pueblo people were not able to fight back anymore, because so many had died. All across the southern part of North America, Spanish settlers built villages and cities. They built Santa Fe and Taos in New Mexico and Los Angeles and San Francisco in California. The Navajo began to raise sheep. English traders began to bring over groups of English settlers to live in the old Iroquois villages and farm their fields. French settlers came to live on the Algonquins‘ and Iroquois’ land (in modern Quebec province, Canada). The few surviving Iroquois tried to fight off the invaders, but they couldn’t. 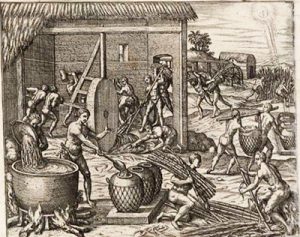 In the South, English and Spanish people (both men and women) wanted to grow rice and sugar cane and tobacco and indigo (a blue dye). Those were good crops for that climate. But they couldn’t find enough people to work on these farms. At first they used indentured servants. But there weren’t enough of them either. So they forced West African people to come to North America and work on these farms as slaves.

Learn by doing: check out some of those “Indian” beads at a bead store
More about slavery
American History – United States Independence