In the 1700s AD, most of North America was still under the control of native people. Because Pueblo people and the Navajo had taken Spanish invaders’ horses and traded them north, they and the Sioux, Ute, Blackfoot, and other Plains Indians did very well. Hunting bison was much easier on horseback than it had been on foot. And the Comanche got rich selling horses to other native people and to Europeans who were settling the Mississippi Valley and the Midwest.

But the English farmers in the South forced more and more West African people to come to North America. They enslaved black people to work on their tobacco and rice plantations (big farms). At the same time, more and more English settlers came to build towns along the Atlantic coast. Many of the people who came had been convicted of crimes in England like stealing. So the English government sent them to North America to get rid of them. That got more people to work on the farms along the Atlantic coast. 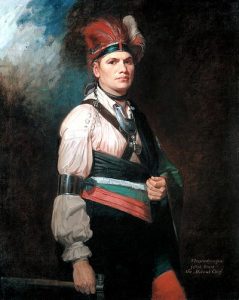 Joseph Brant or Thayendanegea, Mohawk chief, led four of the “Six Nations” against the American rebels. By George Romney

By the 1760s, a lot of English settlers and soldiers came to Canada too. They pushed out the French settlers and the Algonquin and took control. By the end of the 1700s, there were enough English people along the Atlantic coast that they wanted to be their own independent country. They fought the Revolutionary War to get their independence and start the United States of America. They needed help to win the war, and they got that help from the French king Louis XVI, from Spain under Charles III, and from the native Algonquin people.

Some Iroquois (under the Iroquois leader Joseph Brant) and most Cherokee fought on the side of the English. After they lost the war, the new United States government took away most of their land. But the Iroquois and Algonquin who fought for the Revolution didn’t do any better. Many English people who still wanted to be part of England, and many Iroquois, moved to Canada.