What is steel? Ancient and medieval steel 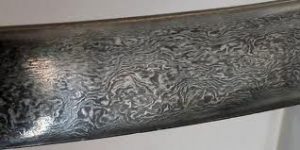 Soon after 300 BC, with the rise of the Silk Road, people were all looking for new ideas for things they could sell. Thanks to Buddhist monks, there were big universities in Mauryan India, where people came from all over Asia to study and work, and they, or someone else in India, invented something new. Indian blacksmiths started to make iron tools and weapons out of a much higher quality of iron that we call steel. Steel is iron with more carbon in it than regular iron. It is much stronger and more flexible (it doesn’t break as easily), and steel edges stay sharp longer.

Indian steel-workers made very high quality steel by wrapping iron and certain kinds of weeds in wet clay, and then baking the package (the crucible) slowly for several days. This forced the carbon from the burnt plants into the iron and created steel. Then they would break the clay and take out a lump of steel – just enough to make a sword. This steel had just exactly the right amount of carbon in it: not too little (that makes the steel too soft) and not too much (that makes the steel break too easily).

Get your own Damascus steel knife

Blacksmiths made a lot of this steel into swords, but it was also useful for other things. For the first time, you could make strong, thin, sharp sewing needles, and by 200 BC people in Han Dynasty China made sewing needles and started to sew fancy silk clothing with embroidery to sell on the Silk Road. By 200 AD, there were steel needle factories in Roman West Asia, too, and people started to do Egyptian Coptic embroidery.

The Romans and Parthians both imported steel swords from India, though ordinary soldiers still used cheaper iron swords. The rise of the Islamic Empire in the 600s AD encouraged this trade across North Africa to Islamic Spain.

In Sri Lanka, by this time, industrial steel furnaces used the regular monsoon windto get enough oxygen into the furnace to keep the heat up – to make enough steel for all the people who wanted it. Charlemagne, in the late 700s AD, thought these “Indian swords” were so valuable that he took the French army and invaded Spain in the hope of capturing some – which he did.

The Samanids and Seljuks spread crucible steel technology north from India to Central Asia, so there were factories making steel in Iran, Uzbekistan, and Turkmenistan in the Middle Ages. Viking traders began sailing south along the Volga river through Russia to the Caspian Sea, where they bought Central Asian steel from the Samanids and brought it home to make swords for Europe. These swords (their brand name was Ulfberht) were so expensive that German blacksmiths made cheap knockoff swords with local, crappy steel, or with just a thin coating of good steel over a cheap steel sword.

People were making low-quality crucible steel in West Asia and all down the coast of East Africa by the 700s AD. Traders probably bought cheap African steel to sell in India, for things like cooking pots that didn’t need to be made of expensive steel. 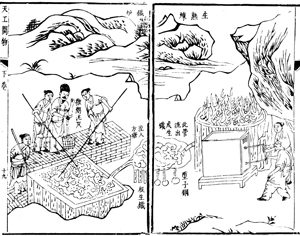 All this time, Chinese blacksmiths were trying to figure out how to make their own good steel so they didn’t have to buy expensive Indian and Central Asian steel. About 100 AD, Han Dynasty iron-workers started to make some of their own steel in blast furnaces burning charcoal. They used Du Shi’s new water-powered bellows. By 1000 AD, Chinese blacksmiths started to use coal instead of charcoal, so they didn’t have to cut down so many trees. 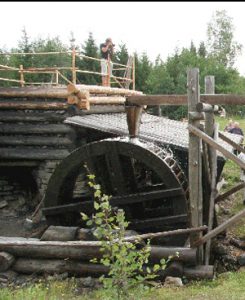 European blacksmiths were also trying to make better steel. In the 700s AD, in northern Spain, blacksmiths started to build bigger, better furnaces, using tubes and water to force air into the forge so it would burn hotter. During the 1100s, Viking traders brought back the idea of the blast furnace and the double bellows, possibly from the Khitan, and Europeans started making better steel. Northern Germany, where the Ulfberht swords came from, was one center, and Toledo, in Spain, was another. By 1450, as the Silk Road collapsed, European smiths were selling steel to the Ottoman Empire. But even at the end of the Middle Ages, African, Chinese and European steel still wasn’t as good as Indian and Iranian steel.