Science in ancient and medieval China 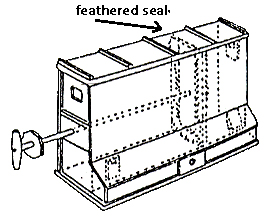 What are some Chinese inventions?

Chinese scientists started inventing a lot of new things around 500 BC, during the Warring States period. That might be because of the formation of the first empires and the rise of the Silk Road.

Most of these new Chinese inventions spread quickly along the Silk Road across Asia. Eventually they even reached Africa and Europe.

About 450 BC, Chinese blacksmiths invented the crossbow. By the 200s BC, Chinese engineers developed the double-piston box bellows to help those same blacksmiths, and the smiths started to make steel sewing needles.

(More about the history of the bellows)

Chemists figured out how to burn cinnabar – a kind of rock – to get mercury, and then mix the mercury with silver or gold ore to extract the silver and gold. 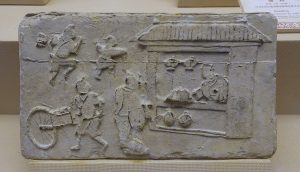 A man pushes a wheelbarrow in front of a wine shop (Han Dynasty China, about 150 BC)

This was important because China was always short of silver, and now smiths could silver-plate or gold-plate a necklace by mixing silver or gold with mercury to make a liquid, dipping the necklace in the liquid, and then evaporating off the mercury. About 150 BC, someone invented the wheelbarrow, too. 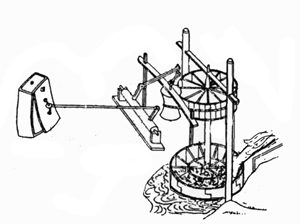 Paper and the compass

It was in Han Dynasty China, 200 BC to 200 AD, that experimenters invented paper, and about the same time the magnetic compass, for telling north from south.

(More about the history of paper) 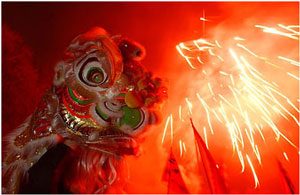 Chinese science: Fireworks and the history of gunpowder

(More about the history of gunpowder)

So about 100 AD, they used Hu Shi’s bellows to run a blast furnace for making steel. In 132 AD, Han Dynasty scholars built the first seismograph to tell you what direction an earthquake was coming from.

A treatment for malaria

Chinese scholars also conducted scientific observations of plants and animals. This resulted in the discovery of the first effective treatment for malaria by Ge Hong in the 300s AD.

Not only that, Chinese astronomers observed the stars and planets, too. The many detailed and careful drawings of flowers and other plants, and star charts, from China show this interest. 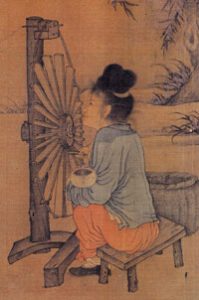 The influence of Confucius made China a place where logical thought was also highly valued. Mathematics was taught in the schools, through the use of a math textbook called the Nine Chapters. The Nine Chapters may have been written as early as the Han Dynasty in the 200s AD (but nobody knows for sure).

(More about math in ancient China)

Printing and the spinning wheel

By around 650 AD, under the T’ang Dynasty, Chinese printers were experimenting with block printing, and around the year 1000 they invented movable type. Around the same time, Chinese blacksmiths began to use coal instead of charcoal to heat their forges. And in the 1200s AD, they (or maybe somebody in Central Asia) invented the first spinning wheel.

(Read more about the spinning wheel)

More about the Nine Chapters
More about Chinese medicine