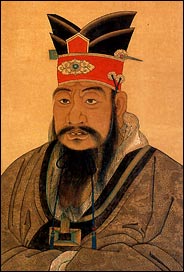 Confucius life: Later portrait of Confucius, from the provincial museum of Shandong, China

The philosopher Confucius‘ main interest was to figure out ways for the government to do a better job of taking care of the people. He lived in China during the 500s BC, under the Eastern Zhou dynasty.

Confucius’ philosophy
Chinese philosophy
Eastern Zhou Dynasty
What was happening in the 500s BC?

Confucius (conn-FYU-shuss) is what English speakers call him now, but when he was a child his name was Kong Qiu. In Chinese, Confucius is Kong Qiu.

He was born in 551 BC, and his parents were poor, although his family had once been rich. They had gotten into trouble with the emperor, and he had taken away their money and their land.

The government of ancient China
Lots more articles about China

Confucius, people say, was a smart and hard-working child, and when he grew up people said he was fair, and polite, and loved to learn things, and so his family sent him to the big city, to Zhou, where the Zhou emperor lived, to go to school. While he was in Zhou, Confucius may have gotten to know Lao Tzu, who was later on the creator of the philosophy of Taoism.

What was Chinese school like?
More about Lao Tzu and Taoism

Confucius becomes a teacher and a judge

When Confucius finished school, he went back to his home in Lu and became a teacher there. When he was 35 years old, he tried to get involved in politics, and maybe get the Duke of Lu to give him some land and money, but when this idea didn’t work out Confucius went back to being a teacher.

He did work for a while as a city magistrate and then as a chief minister of his city, Lu, when he was about fifty, but when he saw that the Duke of Lu was not doing a good job, Confucius quit and left his city.

Confucius spent the rest of his life travelling from town to town around China with his students and friends, giving advice to different rulers wherever he went. Often they didn’t like his advice: once he was thrown in jail for five days! When he was 67, Confucius went back to Lu and settled down there, and he died there when he was 72 years old.

Did you find out what you wanted to know about Confucius’ life? Now read the next article about his philosophy.

Confucius: The Golden Rule, by Russell Freedman (2002). – some biography, and some philosophy. Good reviews.

The Life and Times of Confucius, by Kathleen Tracy (2004).

Or check out this resource page about Confucius.