Where are the Himalaya Mountains? India 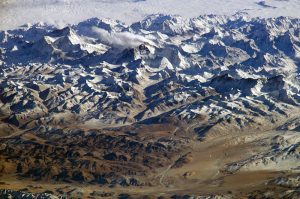 India breaks off of Africa

About 55 million years ago, plate tectonics made the land that is now India break off from what is now Africa. At this time, the first modern mammals like rats and guinea pigs were evolving, and most of the Earth was covered in forests.

The Tertiary Period
Indian environment
What is plate tectonics?
All our geology articles

And runs into China

For five million years India floated slowly away from Africa until, about 50 million years ago, India bumped into Asia. That was about the time that the first primates evolved – the ancestors of monkeys and people. So it was long before there were people. The force of this impact slowly pushed the land between them to fold up into big new mountains which we call the Himalayas.

What is limestone?
The story of primates
More about the Alps
And the Rocky Mountains

So at the very top of the Himalaya mountains you can find limestone that formed at the bottom of the ocean. Plate tectonics pushed the limestone up to the top of the mountain. The Himalayas are older than the Alps, but they’re younger than the Rocky Mountains.

Where are the Himalayas?

The word Himalayas comes from the Sanskrit phrase “home of the snow”, because the Himalaya mountains are high enough to always have snow on them. They are the highest mountains in the world.

More about snow
What is Sanskrit?

Are the Himalayas still growing?

Even today, India is still slowing pushing against Asia, moving north about one centimeter every six months, and that is still pushing the land upward, so the Himalayas are still growing and getting higher and higher. The highest mountain in the world – Mount Everest or Sagarmatha – is in the Himalayas, in Nepal.

Bibliography and further reading about the Himalayas: