Where are the Alps? Mountains in Europe 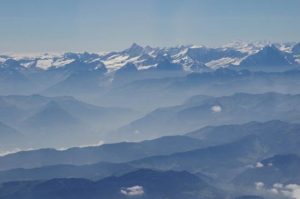 Where are the Alps?

The Alps are a long row of mountains dividing southern Europe from northern Europe.  France and Germany are on one side of the Alps, and Italy is on the other side.

More about Northern Europe
Which mountains are the highest?

When did the Alps form?

The Alps formed about 34 to 23 million years ago, in the Tertiary era. The African tectonic plate bumped into the European tectonic plate. As the two plates pushed on each other, they pushed a bunch of rocks up, just like when you push two piles of sand toward each other on the beach. There must have been lots of volcanoes erupting all over the place and huge earthquakes as this happened. But it didn’t happen all at once. The plates only move less than nine centimeters a year, so the mountains would have taken millions of years to form.

What is plate tectonics?
More about the Tertiary Era
And about volcanoes 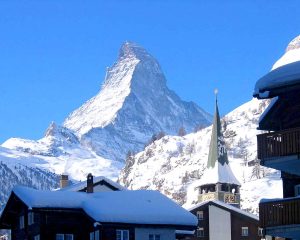 Up in the Alps in Switzerland

Today the Alps are older mountains, and there are no longer any active volcanoes in the Alps, but they are still growing between a millimeter and a centimeter each year!

The Alps in the Little Ice Age

During the Little Ice Age of the Late Middle Ages, glaciers moved down from the tops of the Alps like slow rivers of ice. The ice covered many higher villages completely, so the people who lived there had to move.

More recently, with global warming, those glaciers have melted again. Today, archaeologists are finding long-covered traces of those medieval villages. But this time, the melting is going to go much further than it did before.

Bibliography and further reading about the Alps:

More about Europe’s environment
And more about the Tertiary period
More about Geology
Quatr.us home