Earthquakes, tsunamis, and the Richter scale 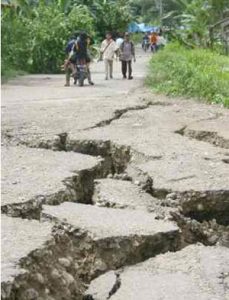 Earthquake in Peru – Earthquakes can split the ground open! What causes earthquakes?

Earthquakes happen when the moving tectonic plates that make up the surface of the Earth move apart or bump into each other, or slide under each other.

This movement tears apart the surface of the Earth, or crunches it up. Most often, this just means a little shaking for a few seconds, and nothing very serious happens.

More about plate tectonics
All our geology articles

Several times a year, though, somewhere in the world there is enough movement to really shake the earth a lot, and the earthquake is serious enough to knock down buildings. When the buildings fall on people, many people can be killed in a few minutes. The strongest earthquakes can break trees in half.

What is the Richter scale?

What are exponents?
More about logarithmic scales

How strong was that earthquake?

At level 6, heavy furniture moves around, and many people will feel frightened, but there’s not really much damage. In a level 8 earthquake, many buildings will fall down.

Because most of the Earth is covered by oceans, earthquakes often happen in the ocean. Usually an earthquake in the ocean just shakes the water and people don’t notice. But sometimes the water pulls all together into a huge wave called a tsunami (tsoo-NAMM-ee). If you are near the coast and there’s an earthquake, get away from the beach as fast as you can, in case a tsunami comes.

Are there earthquakes on other planets?

Because at least some other planets, like Mars and the moons of Jupiter, have tectonic plates like Earth, they probably also have earthquakes.

More about other planets

People have tried to predict and prevent earthquakes for thousands of years, but we still can’t really predict them, and we can’t do anything to prevent them. Early people made sacrifices to their gods at places like Delphi, where there are a lot of earthquakes, to try to keep the gods happy so they wouldn’t shake the earth.

More about the oracle at Delphi

By the time of Aristotle (300s BC) scientists understood that this was a natural thing the earth just did. The Chinese scientist Zhang Heng built a seismograph in the 100s AD that served as a sort of early warning system. Our seismographs today use pretty much the same idea. By the 800s AD, Ibn Sina in Iran knew that earthquakes shape the geology of a region, thrusting some rocks up and pulling others down. 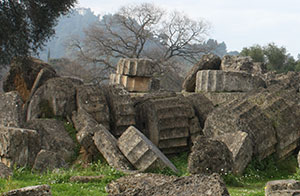 An earthquake knocked down the Temple of Zeus at Olympia

People sometimes think an earthquake can destroy a civilization. It’s true that some earthquakes kill tens or even hundreds of thousands of people, but the survivors usually rebuild their city pretty soon. One early earthquake knocked down the palaces of Crete about 1700 BC, but people rebuilt bigger and better palaces.

Another serious earthquake destroyed the city of Troy about 1250 BC, and again the people rebuilt their city.

More about Troy and the Trojan War

A big tsunami hit Peru about 500 BC, but the Chavin also rebuilt. But if a city is already getting smaller, a big earthquake encourages people to abandon it. That’s what happened in Rome, when a big earthquake damaged buildings in 849 AD – many people moved across the river, or left town.

But when a great earthquake knocked down most of Lisbon in Portugal in 1755, Portugal again used the opportunity to rebuild a more modern city (and Voltaire wrote about it in his Candide).

Today, while we haven’t figured out how to stop earthquakes, or how to tell if one is about to happen, we do know how to cause them. Fracking for oil is causing many small earthquakes, and it may cause a large one someday soon if we don’t stop.

Did you learn everything you needed to know about earthquakes? Let us know in the comments!

Learn by doing: what to do if there’s an earthquake

Bibliography and further reading about earthquakes: