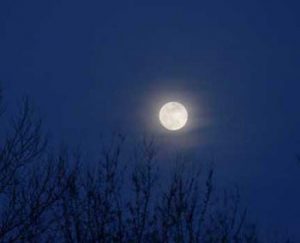 Earth’s moon (about 239,000 miles from Earth) (That’s almost ten times as far as going all the way around the Earth)

Where did the moon come from?

Nobody knows exactly how the moon formed, but this is one possibility. After the planet Earth formed (along with the other planets), about four and a half billion years ago, during the Hadean Eon, there were still a lot of leftover bits of rock going around the Sun. These leftover rocks were not part of any planet.

Hadean Eon
The planet Earth
What is gravity?
More astronomy
All our physics articles

One especially big chunk of rock smashed into the Earth. Most of it stuck and became part of the Earth, but some bits splashed off the Earth. Earth’s gravity caught some of these rocks and they started to orbit around the Earth.

About 45 million years after the Earth formed, many of these orbiting rocks stuck together to become the moon. Other planets often have moons too, though they didn’t all form in exactly the same way.

Dark side of the moon

At first, the moon was probably much closer to Earth. Probably it spun around much faster than it does now. Earth’s gravity, pulling on the moon, has gradually slowed it down. So now the same side of the moon is always facing the Earth. All the moons on the other planets do this too. 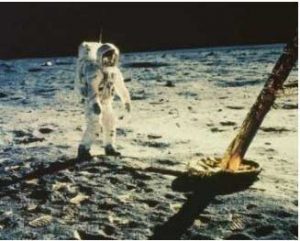 A man in a spacesuit walks on the moon

Tectonic plates
All our geology articles

Inside the moon, it is hot, but not as hot as Earth. The moon is much smaller and cooled off faster than Earth. It’s not hot enough anymore for tectonic plates to shift around as they do on Earth. The core of the moon, like Earth’s core, is probably made mainly of iron.

On the surface of the moon, it’s like a rocky desert. The sky looks all black. That’s because there is no atmosphere to reflect the sunlight and make it seem blue. The moon is so small, it hasn’t got enough gravity to hold on to very many light molecules like oxygen or hydrogen. The oxygen and hydrogen just float off into space.

Why does the moon go around the earth?

What is centrifugal force?
More about the sun
What is light made of?

Phases of the moon

As the moon goes around the earth, we cycle between new moons and full moons every month. It takes about a month for the moon to get all the way around the earth. That takes us from one full moon to the next full moon. That’s why we call it a month. The word “month” comes from the word  “moon”. Here’s a short video showing how this works (the big ball in the middle is the Sun, the colored ball is the Earth, and the tiny ball going around the Earth is the Moon):

Why are there eclipses?