What is silicon? Atoms, elements, chemistry 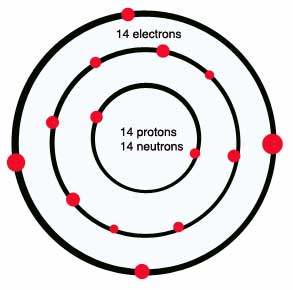 Diagram of a silicon atom

When a red giant star is getting older and runs out of helium fuel, it starts to convert the oxygen atoms in the star into silicon atoms. All silicon is made this way, inside a red giant star. Silicon is heavier than oxygen, because oxygen has only eight protons in its center and silicon has fourteen. When the star runs out of oxygen, it starts to turn the silicon into even heavier elements like iron.

When the red giant star eventually becomes a supernova and explodes, the remaining silicon inside the star shoots out into space and forms part of a new nebula. Silicon is unstable, and does not usually exist on its own outside of stars. Instead, silicon usually hooks up with some other kind of atom, or to other silicon atoms, to make a molecule. 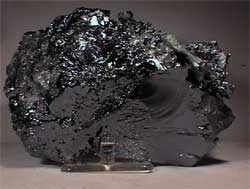 Silica – a kind of glassy rock

Sometimes the dust in one of these nebulae pulls together to form a planet. Some of the silicon atoms become part of that new planet. The crust of the planet Earth, for example, is about one quarter silicon atoms. Silica is what rocks like quartz and feldspar and granite are made of. Most beach sand is also made of silica. All plants and animals need small amounts of silica in order to live, though silica is especially important to plants.

Because silica is pretty common, people also use silica to make glass, and in making computers. It’s also what Silly Putty is made of!

Learn by doing – Sand Castles
What is Glass?