Most of the universe is just emptiness – there is nothing there at all. It’s dark. That’s space. But within the space there is a small amount of stuff. Most of the small amount of stuff in the universe is loose electrons. When the universe first got started, just after the Big Bang, about 14 billion years ago, there was this energy floating around space, loose. This energy is made of electrons and protons and neutrons, which are just tiny bits of energy, so small you can’t see them, even with a powerful microscope. Sometimes these electrons and protons would bump into each other. Once in a while, when the electrons bumped into each other, they would stick together, so you would get little clumps of electrons.

When electrons got close to each other, they behaved a little differently from when they were all alone. After a while, the protons and neutrons began to together in the middle, and the electrons orbited around the outside of a clump. These more organized clumps are atoms. The first atoms were simple hydrogen atoms. 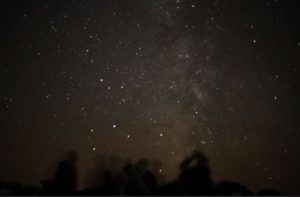 Little by little, some of these atoms began to clump together, accidentally, into bigger clumps. These clumps had gravity, and so other atoms were attracted to them, and stuck to them. The clumps got bigger. Soon they formed huge balls of atoms which turned into stars, and eventually those stars created more complicated atoms and molecules, which spun off into planets. The earliest stars are probably not much younger than the universe itself.

But even when there were stars and planets, they took up only a very small part of the universe. Most of the universe is still empty space, with nothing in it at all. And it’s huge – about 13.7 billion light-years across.