Where do tornadoes come from? – Weather – Earth science 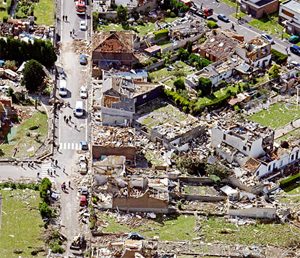 A tornado wrecked a town in northern France

If a tall column of spinning air reaches all the way from the ground to the clouds, we call that a tornado. Sometimes the tornado is invisible; sometimes it picks up a cloud or a bunch of dust so you can see it. Other tornadoes called waterspouts form on the ocean and pick up water.

Tornadoes can happen anywhere, but most tornadoes happen in places where there’s a lot of open space for winds to blow in, especially in the Great Plains of the United States. The chances of a tornado hitting your house are about one in ten million, and you’re more than five hundred times as likely to be killed in a car crash as by a tornado. However, if you do see a tornado or hear that one is coming, you should get inside and go in the basement or stay as low as possible. If you can’t get inside, lie down in the lowest place you can find, like in a ditch.

Whatever you do, don’t go out to see the tornado. Tornadoes can be very dangerous. Sometimes tornadoes pick up people and even cars right off the ground, and then drop them again when the tornado calms down.

Bibliography and further reading about tornadoes: