A bolt of lightning in the sky

Hot air and cold air are constantly moving around the Earth, as the hot air rises and the cold air sinks – that’s what makes wind. Sometimes as this airmoves around, it gets more exciting than just wind, though.

A thunderstorm begins when the wind picks up a lot of water from the ground and the water-heavy air rises into the sky. Sometimes this happens when two blasts of wind run into each other and push the water up. Sometimes it happens when wind blows towards a mountain chain, so the mountains push the wind upward. Sometimes it’s when the ground is warmer than the air, so the ground heats the air near the ground and it rises. As the water-heavy air rises up into the sky, it gets cooler, and the water vapor condenses back into drops of water which form cumulus clouds.

As the air continues to rise and cool off, the water drops inside the cloud freeze into bits of ice. Nobody’s sure how it happens, but some of the ice globs seem to take electrons from other ice globs, so that the ones with more electrons get a negative charge and the ones with fewer electrons get a positive charge. The positive ions and negative ions attract and repel each other to build up electrical charge.

These globs of ice are heavy and Earth’s gravity pulls them down to the ground. If they fall fast enough, before they can melt, they hit the ground as hail. If they fall slower, they melt when they get warmer closer to the ground, and fall as rain. Now the clouds are cumulonimbus clouds. 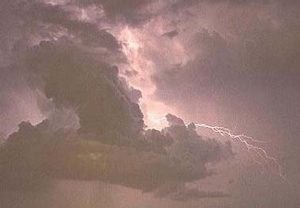 When the electrical charge gets too strong, lightning strikes. This evens out the charge and releases the pressure. The bolt of lightning heats up the air right around the bolt to be hotter than the surface of the Sun – the hottest thing on Earth. This super-hot air expands (because hot air takes up more space than cold air), and pushes hard against the colder air next to it. That sudden push causes the vibrations in the air that you hear as thunder. The thunder and lightning happen at the same time. You see the lightning first, and then hear the thunder a little later, because sound waves travel through the air more slowly than light waves.

For a short time, warm air is still rising, while colder air is falling right past it. This makes all kinds of dizzying ups and downs in the air, and you get strong winds or even tornadoes. But soon the falling air takes over, and no more air is rising, and the thunderstorm runs out of water and stops.