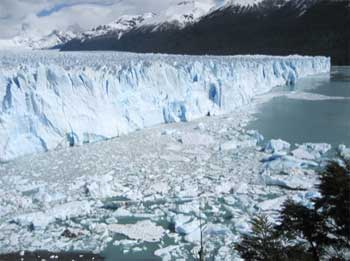 How water freezes into ice

When water gets colder than 32 degrees Fahrenheit or zero degrees Celsius, it freezes into ice.

What is water made of?
From water to steam
More about temperature
All our chemistry articles

As the water gets colder, the molecules of water lose their energy and move more slowly – that’s what it means to be colder. Molecules that move more slowly find it’s easier for them to hook on to each other by sharing electrons.

What is heat?
What are molecules?
Hexagons and geometry 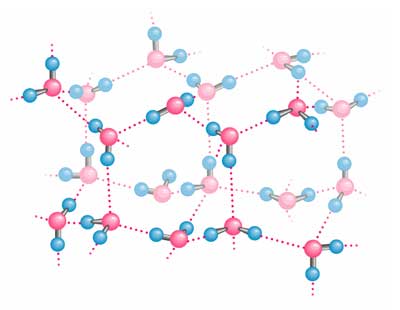 When water freezes into ice, it takes up about 9 per cent more room than it did when it was water. That’s because when the water molecules are locked together, they are farther apart from each other than when they are bouncing around loose as a liquid.

Water with salt in it, like in the oceans, can freeze too, but it won’t freeze until it gets much colder than fresh water ice.

Ice on other planets

More about space
The planet Mars

On Earth, the temperature is often just right to have liquid water, which is good because water is necessary for all life on Earth. But still a lot of the water on Earth is in the form of ice. At some times in the past, like during the Proterozoic period about two billion years ago, the whole Earth was probably covered in ice.

The Proterozoic
The last Ice Age
The Little Ice Age

The last major glacial period, when ice covered the Earth as far south as Krakow in Poland, and almost all of Canada, ended about 10,000 years ago, but another glacial period could start again anytime – we don’t really know what makes them start. The glacial periods, when there is a lot of ice, are much longer than the warmer periods like the one we are in now.