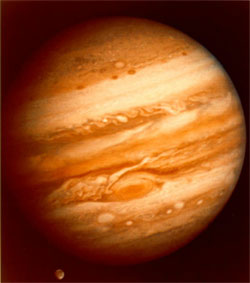 Jupiter is so far away that it takes Jupiter about twelve of our years to go around the Sun. Some people think that Jupiter may actually have formed even further away from the Sun than it is now, and then drifted closer.

Like the other planets, Jupiter formed about 4.5 billion years ago. Jupiter is the biggest planet that goes around our Sun. It is so big that if you smashed all of the other planets together into one ball, Jupiter would still be more than twice as big as that ball. Because Jupiter is so big, it has a lot of gravity. You’d weigh close to three times as much as you do on Earth. Because Jupiter’s so far from the Sun, it’s also extremely cold there (about -278 degrees Fahrenheit), much colder than anyplace on Earth. It’s so cold and there’s so much gravity that on Jupiter, hydrogen becomes a solid instead of a gas.

Most of Jupiter is not made of iron or rock, like Earth, but of hydrogen and helium gases. If you went to Jupiter, there wouldn’t really be anything to stand on – it’s like a thick ocean of hydrogen and helium. The hydrogen and helium and other things in Jupiter’s atmosphere seem to be in bands, and where these bands meet there are big storms. The biggest storm, which we call the Great Red Spot, has been going on without stopping since at least the 1600s AD! You can see it in the picture. In reality, that spot is bigger than Earth is.

Jupiter has at least 63 different moons. Some of them are nearly as big as the planet Mercury. Some of these moons have ice on them made from frozen water, and possibly liquid water oceans under the ice. If that’s true, then there could be life in those oceans. But even if there is it’s probably just one celled creatures.