What is helium? Atoms, elements, and chemistry 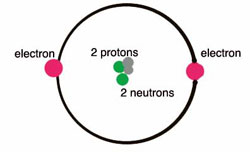 Diagram of a helium atom

Helium is a very simple atom.

Helium is a simple atom. The nucleus of a helium atom has two protons and two neutrons. Around the nucleus, there are two electrons. The only atom simpler than helium is hydrogen.

More about hydrogen
What are atoms made of?
All our chemistry articles

What are stars made of?
Turning into carbon

Where on earth do we find helium?

What is uranium?
More about electrons
And radioactivity 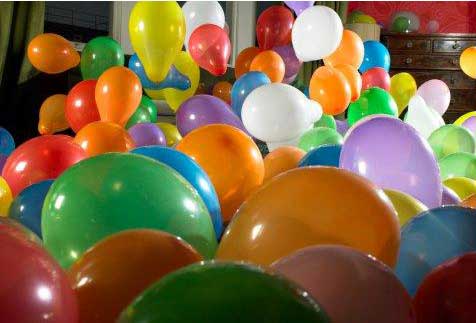 Because helium atoms are small, they are very light. Like hydrogen, helium is lighter than air, so when you fill balloons with helium, they float.

But the main thing people use helium for is to keep things from exploding. Helium atoms are very stable – it’s hard to get them to combine with other atoms into molecules.

So if you are working with materials that might explode, you can do it more safely in a helium atmosphere. Welders, for example, use a lot of helium this way.

Will we run out of helium?

There’s a limited amount of helium on earth, and when we use it, it floats away into the atmosphere. We get it as a byproduct of natural gas. Radioactive decay makes more helium, but not as fast as we’re using it up. So one day, Earth may run out of helium, or at least have to spend more money to find new places where there’s still some helium left. But not right away.

Will we run out of helium?

Did you find out what you wanted to know about the helium atom? Let us know in the comments!

Bibliography and further information about helium and atoms: