What is uranium? Atoms, elements, chemistry 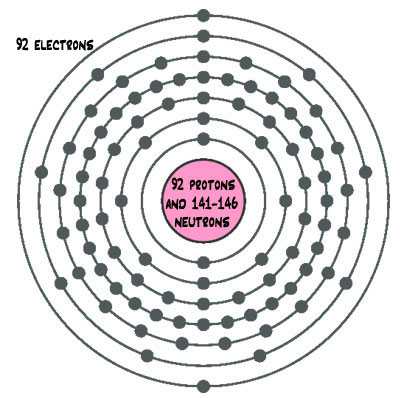 Diagram of a uranium atom

Uranium is a rare atom, not just on Earth but also in space and on other planets. There is not very much uranium anywhere. That’s because, like lead or gold, uranium only forms inside exploding supernovas. Because uranium atoms have so many protons and neutrons in them, they don’t form very easily. Uranium is the heaviest atom that occurs in nature.

Like other heavy atoms such as iron, uranium atoms have more neutrons than they do protons. Not all uranium atoms have the same number of neutrons. They have between 141 and 146 neutrons, usually 143 or 146 neutrons. Uranium atoms are so heavy that they are unstable. Even the strong nuclear force has trouble holding together all their protons and neutrons, and they often lose a few protons and neutrons that go shooting off. We call this radioactivity. 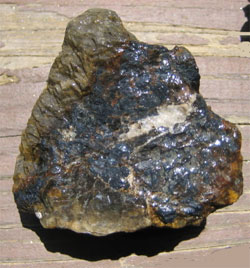 A piece of uranium ore

Because they have so many neutrons, uranium atoms can also easily break apart into two lighter atoms, especially if it is hit with other neutrons coming at it. They can break apart into various different atoms, but usually you get other rare atoms like krypton, barium, strontium, or xenon. Not very many kinds of atoms can do this. When a uranium atom breaks apart, it needs less energy to hold the two new smaller atoms together, and this energy shoots out in the form of heat. We call this fission. Each time a fission reaction takes place in a lump of uranium – each time a uranium atom breaks apart – it shoots out energy that bumps into other uranium atoms and breaks them apart, and this sets off a chain reaction that can result in a big explosion. That’s a nuclear bomb.

(The man who discovered uranium named it after the planet Uranus, but it has nothing in particular to do with Uranus actually.)