What is a neutron? Atoms and Chemistry 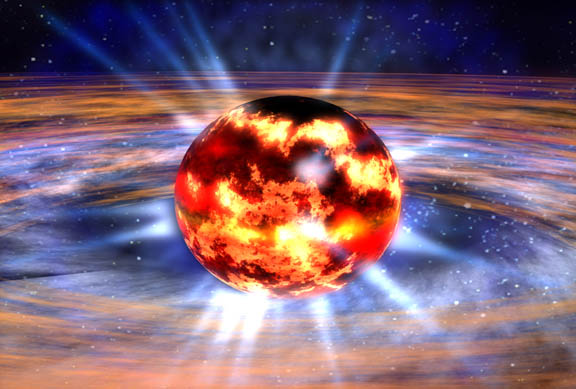 A neutron star (from NASA)

A neutron is a tiny particle like a proton, smaller than an atom. Like protons, neutrons are too small to see, even with an electron microscope, but we know they must be there because that’s the only way we can explain how atoms behave. All neutrons, everywhere in the universe, are exactly the same, and pretty much all of them are inside atoms.

Like protons, neutrons first formed out of bosons, in the earliest moments of the Universe after the Big Bang.

Neutrons are actually made of even smaller invisible particles, called quarks. Like protons, each neutron is made of three quarks, but neutrons are made of two down quarks and one up quark. A strong nuclear force sticks the quarks together. Most of the mass of a neutron comes from this strong nuclear force, rather than from the quarks. Because a neutron has two down quarks and only one up quark, it has no electrical charge – it’s neutral, so we call it a neutron.

Neutrons are part of the nucleus, or center, of an atom. The simplest atoms – hydrogen atoms – have a nucleus made of just one proton, with no neutron. But most atoms have more than one proton, and they need neutrons to help the strong nuclear force stick the protons together. Most atoms have about the same number of neutrons as protons, but some have more neutrons than protons.

Neutrons also have an important role to play in neutron stars. In a neutron star, there’s so much pressure that the protons and electrons in the star mix together and form neutrons (because adding an electron to a proton makes it into a neutron). So the neutron star is full of neutrons. Because neutrons don’t have either positive or negative charge, they don’t push each other apart, and they can pack very closely together, making an extremely dense star.

Learn by doing: the nuclear strong force
More about protons
More about electricity

Bibliography and further reading about atoms and neutrons: