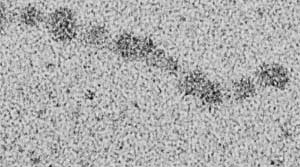 Protein molecules – each dot is one molecule.

What is a molecule?

A molecule is a group of two or more atoms that stick together. Molecules (MOLL-uh-cyools) are so small that nobody can see them, except with an electron microscope. Pretty much everything on Earth and other planets is made of molecules, and so is some of the dust in space.

What is an atom?
A molecules project with Lego
All our chemistry articles

Where did molecules come from? (Atoms)

Even before there were any planets, water and hydrocarbons were floating around in space on their own. Other molecules were made of heavier atoms, like silicon or gold. Still out in space, some hydrocarbons got together and formed bigger molecules called amino acids.

Build your own molecules!

When the planets did form, the ones that were further away from stars, like Jupiter and Neptune, were made mostly of lighter molecules like water and hydrocarbons. Earth, which formed about 4.5 billion years ago, was closer to the Sun, and made mostly of heavier atoms like iron. A lot of silicon and other minerals also got to Earth, where they make up the rocks of the Earth’s crust.

More about planets
All our geology articles

Nobody is sure how or when the water, hydrocarbons, and amino acids got to Earth. But once they were on Earth, the amino acids got together to make more and more complicated molecules – maybe first ribonucleic acids, then proteins. The biggest organic molecule today is DNA. Each molecule of DNA has more than two billion carbon atoms in it (plus a lot of other kinds of atoms too).

What is ribonucleic acid (RNA)?
How is DNA different from RNA?

All molecules need some way to hold their atoms together. The two main ways that atoms hold together are

Today people can make new kinds of molecules in laboratories and factories. Some of the biggest molecules that people make are plastics, like what plastic garbage bags or plastic Legos are made of. Plastics are also hydrocarbon molecules. People also make new molecules for medicines.

Bibliography and further reading about molecules: