What are amino acids? Organic chemistry 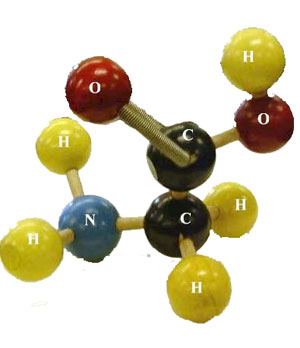 A model of the amino acid molecule glycine (red is oxygen, black is carbon, yellow is hydrogen, and blue is nitrogen atoms)

What are amino acids?

Amino acids are molecules made out of hydrogen, oxygen, carbon, and nitrogen atoms (and a little sulphur).

More about hydrogen
What are molecules?
All our chemistry articles

When did the first amino acids form?

The earliest amino acids formed in space, about 14 billion years ago, before our solar system’s planets even existed.

More about space
When did the planets form?
How old is the universe?

How did amino acids form?

Probably they formed inside chunks of ice. When ultraviolet radiation (energy) from stars shot through the ice, it encouraged molecules to form. Astronomers have found evidence that amino acids are still out there floating around in nebulae in space.

What’s a nebula?
More about radiation

From amino acids to proteins and RNA

When amino acids first came to Earth, they probably came inside these chunks of ice. When the ice later turned to water on a warmer Earth, the amino acids floated around in the water. They eventually linked up to become bigger molecules called ribonucleic acid (RNA) and proteins. These proteins are what all living cells are made of.

What are proteins?
What is RNA?

Eat a lot of different kinds of food

Different amino acids are in different foods, but if you eat milk, eggs, chicken, and bread you will get all of them. If you’re vegan, you can get amino acids from bread, lentils, bananas, peanuts (or peanut butter), and chocolate or red wine. We can’t store amino acids in our bodies, so we have to eat these foods pretty much every day.

More about the first living cells