What is a protein? Organic chemistry

Proteins are a type of molecule made mainly out of hydrogen and carbon atoms. They are combinations of smaller molecules called amino acids. The first amino acids probably developed into proteins more than four billion years ago on Earth, possibly with the help of ribonucleic acid, or RNA. We don’t know whether this process has happened on any other planet. Then the proteins themselves developed into living cells a little later on (definitely by four billion years ago). 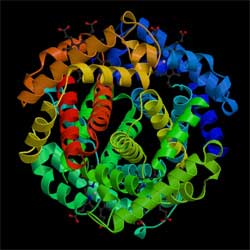 A model of folded protein molecules

Protein molecules are very large, often with thousands of atoms in them. One protein molecule may have as many as 5000 amino acids in it. They aren’t just in one long line, but fold up in particular ways. Some proteins form spirals, as in this picture, while others are different shapes.

When you eat food with protein in it, your stomach breaks down the protein into amino acids, and then your blood carries the amino acids all over your body to your cells, which use the amino acids as building blocks to make new proteins that you need to make new cells or to fix the cells you already have. If you don’t eat enough protein, your body won’t be able to fix old cells that are damaged, or to build new ones. But most Americans get plenty of protein without needing to think about it, just eating normally.

More about the first living cells

Bibliography and further reading about proteins: