How did cells evolve? Cell biology and evolution 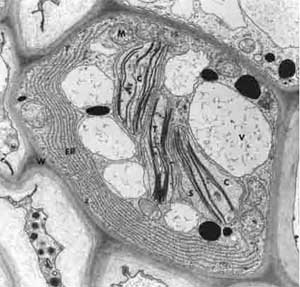 One cell of a plant (magnified 22,500 times) Thanks to Ohio State University

We don’t know yet whether there are cells on any other planet besides Earth. On Earth, the first cells got started about 3.5 billion years ago, about 2.5 billion years after the Earthfirst formed.

These early cells were pretty simple – a molecule with a wrapper around it to keep it safe. Many scientists think that life on Earth first began about four billion years ago when amino acids developed into RNA, a larger molecule made out of amino acids that has the ability to reproduce itself, and also to make proteins. RNA was very unstable though – it often broke apart or changed the order of its atoms. After a while, some RNA evolved into DNA, which was a more stable, though more complicated, version of the same idea.

Some time during this process, the RNA or DNA also began to move inside a lipid membrane: chains of lipid molecules clinging together in the shape of a bubble, where the RNA or DNA could be more protected and would be less likely to break apart. We don’t understand how this happened yet. But once the RNA or DNA was inside the lipid membrane, that would be the earliest living cell.

From there, cells continued to evolve and became more and more complicated. By around three billion years ago, the world was full of prokaryotic cells. These simple cells had DNA, RNA and proteins inside them, and they could take in food and push out their garbage. They could move themselves around, and they could reproduce. By three billion years ago, some of these prokaryotes could photosynthesize, or make food out of sunlight.

Most cells on earth are still prokaryotes. But about two billion years ago, a few prokaryotes evolved into a more complicated kind of cell called a eukaryote. Most likely eukaryotes started out as prokaryotes that began to have other prokaryotes living inside their cell membrane, which cooperated with each other so they could get more done and be safer. These became mitochondria and chloroplasts. Eukaryotes also developed other specialized parts of the cell. Some parts worked to digest food, while other parts got rid of garbage, or moved the cell around, or helped the cell reproduce.

Most eukaryotes are still one-celled creatures. But by about 600 million years ago (less than a billion years ago), a few eukaryotes had evolved into creatures with more than one cell. This probably happened more than once, so that there are several unrelated groups of multi-celled creatures. One group is animals: the earliest multi-celled animals were like hydras. Other eukaryotes evolved into plants and some other groups like mushrooms. But still today the vast majority of living things on earth have only one cell.

Or check out this ipad/android app that lets you look inside a cell.