What is a prokaryote – Cell biology 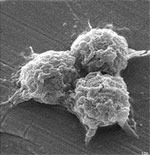 A prokaryote (seen through a microscope)

What does “prokaryote” mean?

The simplest living cells are called prokaryotes, which is Greek for “before the nucleus” – these are cells that were so simple that they didn’t have a nucleus.

When did the first prokaryotes evolve?

The first prokaryotes probably evolved from even simpler cells about 3.5 billion years ago, during the Archaean Eon. For at least a billion years, prokaryotes were the only living things on Earth.

How many prokaryotes are there on Earth?

Many prokaryotes live inside people

But still only about one in every million bacteria in the world lives on a person. One very common kind of bacteria is called E.coli.

What do E. coli bacteria do? 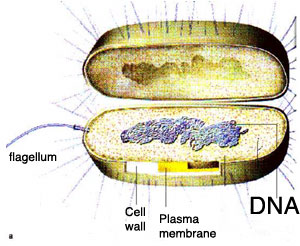 What’s inside a prokaryote cell?

Even prokaryotes (pro-KAR-ee-ot-eez) are more complicated than just a lipid membrane and some DNA.

Prokaryote cells also have a little string of protein molecules that hangs off the end like a tail, called a flagellum. The cell can move this flagellum by pushing protons or energy at it, and it can use the flagellum to move itself from one place to another.

How do prokaryote cells get energy?

Like other living things, prokaryote cells need energy for all this unzipping and building and dividing. The earliest prokaryotes got their energy by letting enzymes take apart molecules of various things and letting out some of the electrons that held that molecule together.
The early prokaryotes broke apart a lot of different kinds of molecules for energy. Some of them broke apart hydrogen or sulfur molecules. Others broke apart amino acids.

About three billion years ago, some of the prokaryotes evolved to be able to pull electrons out of the sunlight that fell on them from space, in a process called photosynthesis. All prokaryotes can also get rid of the leftover molecules and atoms they don’t want anymore by pushing them back out through the cell wall.

About two billion years ago, a few of the early prokaryotes evolved into more complicated cells called eukaryotes, which are the ancestors of plants and animals and mushrooms and algae.

Bibliography and further reading about prokaryotes: