What is an enzyme? Cell biology 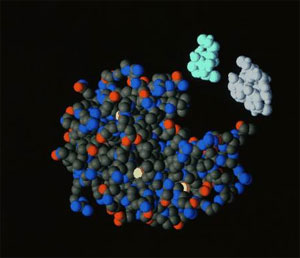 A model of an enzyme reacting with another molecule and breaking it into two pieces. Each little ball represents an atom.This enzyme, lysozyme, breaks up bacteria in your blood to keep you from getting sick.

What are enzymes made of?

An enzyme is a kind of big, complicated protein molecule, made mainly of hydrogen and carbon atoms, but with some other atoms as well.

What are proteins?
What are hydrocarbons?
More about amino acids
Evolution of cells
All our biology articles

When did enzymes evolve?

Both prokaryote and eukaryote cells use enzymes (ENN-zimes), so the first enzymes probably evolved around four billion years ago, together with the first living cells.

How do cells make enzymes?

Prokaryote cells assemble enzymes in their cytoplasm. The cell’s DNA molecule uses enzymes to assemble RNA molecules, and these RNA molecules then in turn assemble more kinds of enzymes.

What is DNA?
Where did RNA come from?

What do enzymes do?

How do cell membranes form?
Cell digestion
What is cytoplasm?

When the enzyme is done, it lets the new molecule go, and it’s ready to grab two more molecules and do it again. Each kind of enzyme has its own shape, and it will only work with molecules that fit into it exactly, like having the right puzzle piece in a puzzle, or the right key for a lock. That way each kind of enzyme can do its job and not interfere with anything else in the cell.

How do new enzymes evolve?

New enzymes appear accidentally, when a old kind of enzyme accidentally gets broken or forms wrong. Usually these broken enzymes are no good to the cell, and sooner or later the enzymes in a lysosome break them down and recycle their parts.

What is a virus?
Natural selection
History of disease

But sometimes it turns out that the broken enzyme happens to be the right shape to match up with, for instance, a new virus that is trying to invade the cell and kill it. Maybe the new enzyme can break up that virus and kill it instead, saving the cell.

Enzymes that work outside of cells

Even in eukaryotes, some enzymes still leave the cell to digest food outside it. In your own body, you’ll find some of those enzymes in your stomach or in your saliva (spit).

What does a stomach do?

Those enzymes break down your food so it can get into your cells through the cell membrane.