Greek doctor letting blood out of a patient because he believes in the four humors: history of medicine

How did ancient doctors treat diseases?

Ancient doctors tried to cure everyone who was sick, but they did better with some diseases than with others. The history of medicine is full of mistakes as well as successes.

Let’s look at some common diseases and see what Egyptian, Roman, or Islamic doctors were able to do about them:

fortunately, it doesn’t matter much what the doctor does here, because you will probably get better on your own. Still if you get a fever and then the doctor bleeds you to reduce your blood humors, that will make you sicker not better. You were probably better off not going to the doctor.

An herbalist, on the other hand, might have been able to give you willow bark (aspirin) for your fever, which would at least have made you more comfy, and maybe a cough syrup like slippery elm tea too. But in the form of willow bark, aspirin gives you terrible stomach aches. And if you had gone to a healing shrine, the extra rest and healthy food and hot baths might help you feel better quicker. 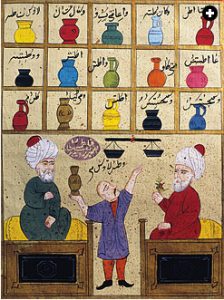 From an Ottoman manuscript, two doctors telling the pharmacist how to make different medicines

what you really need is antibiotics, and those were not invented until about the 1930s. So you would have to get better on your own if you were going to get better.

Bacteria and infections
What is dysentery?
More about cholera

Again, good food and plenty of rest, not being bled, and maybe some cough syrup would be your best bet. But people died of these diseases in antiquity, or they went deaf from earaches.

doctors were probably better at treating broken bones than other people were, because they understood anatomy (the inside of the human body) better. Hippocrates gives a pretty good description of how to set bones.

Without a doctor, if the bone wasn’t set right, you could end up not ever being able to use that leg again. But the greatest danger was probably from infection.

nobody had any idea what to do about malaria, which was much more common in ancient Greece or Rome than it is today. Healthy adults usually do not die of malaria, but children and old people and sick people often do. Even today malaria is difficult to cure completely. Healing shrines, where you could get rest and good food, may have helped some people recover.

What is malaria?
Why do mosquitoes bite?

ancient doctors did not have antidepressants like Prozac, but all different kinds of healers would try to talk you through your depression. Some people may have smoked or eaten marijuana.

Often you would go to a healing shrine where the change of scenery and a chance to rest might help you to pull out of your depression. Talk and rest are not always enough to cure a depression though.

even today, doctors cannot cure all cancer, and often all a doctor can do is to give you painkillers. Ancient doctors did not have any medicines that cured cancer, and did not have as good painkillers as modern doctors have. Opium was known, but it is not clear how widely doctors used it. Most patients probably relied on wine or beer to help them with their pain.

Where does opium come from?
Wine and wine-making
History of beer

Today, smallpox has been wiped out by vaccinations, and many people are vaccinated against measles. But not enough people: more people catch measles every year, and some people die of it.

What is smallpox?
More about measles
And bubonic plague

Doctors can cure plague with antibiotics. But in antiquity, there was no medicine for anyone who had these diseases. People were more likely to live if they got good nursing care – plenty of good food, rest, and clean water.

Did you find out what you wanted to know about the history of medicine? Let us know in the comments!

Learn by doing: talk to an older person who’s had measles about their experience
More about Islamic medicine
More about Chinese medicine
And more about Indian medicine

Bibliography and further reading about the history of medicine: