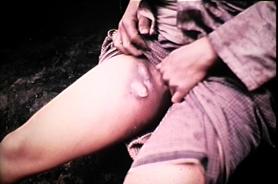 What was the bubonic plague?

Bubonic plague (along with smallpox) was one of the most feared diseases of the ancient and medieval worlds. Nobody could tell what caused it.

Did people die of the plague?

Most people who got bubonic plague died within a few days, screaming in pain. And when one or two people in a village got it, usually it spread to everyone else. Many of them died too.

Plague caused a fever, and black spots on your chest sometimes. Many people got great big black swellings on their armpits and at the top of their legs. After that the tips of your fingers and toes and your nose often turned black. That’s why people called it the Black Death. These swellings got hard like rocks and hurt.

And then in a day or two people usually died. There was no effective treatment. Of course people tried all kinds of things, from magic to surgery to having chickens sit on the buboes (the swellings). Sometimes people did get better on their own, if they had good nursing care and were very healthy to begin with.

Today we do know what causes bubonic plague: it’s a bacterium. Fleas carry it in the blood they suck; if a flea bites an infected person or animal (usually it’s rats) and then bites you, then you’ll get it too. It’s also possible to get some kinds of plague by breathing in the bacteria. People do still get bubonic plague, even today. But today we can cure the plague with antibiotics, and so most people who get it live.

More about bacteria
And about antibiotics

Where did the plague first strike?

DNA evidence shows that the plague came first from China, but the first recorded instance of people getting bubonic plague was in Constantinople about 570 AD. Many people died. Soon afterward the plague spread from Constantinople to Europe. Plague epidemics were much worse in places where people were crowded together and didn’t get enough to eat. Crowded villages and cities had more bedbugs, lice, and fleas, which bit the rats and then bit people and so spread the disease. Or, again, people may have spread it by sneezing and coughing.

The plague in Constantinople 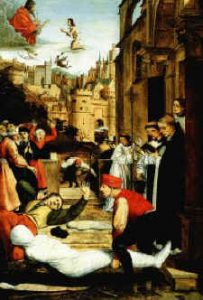 The Black Death in a medieval town

There was another very serious outbreak of plague in 1328 AD which also began in China and by 1347 spread across the Mongol Empire to West Asia, finally killing people in North Africa and in France, England, Germany and Italy. This plague caused the end of the Mongol Empire. It may have reached northern India, too.

The Black Death in Europe

It reached Europe during the Hundred Years’ War. A lot of people in Europe were already very poor and hungry because the soldiers fighting the war had wrecked their farms. Then people began to catch this terrible sickness that was spreading along Mongol trade routes from China through Central Asia to Europe. That was the bubonic plague. 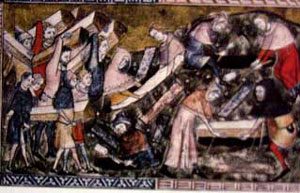 Burying people who died of plague

Most of the people who got the plague died, especially poor people who didn’t have good food to eat. About one out of every three people in Europe, and many people in Asia and Africa too, died during this plague.

The Black Death in Africa

The Black Death may have weakened Aksum in Ethiopia, the Kanem in Niger, the Sao in Chad, and Great Zimbabwe even further south.

Partly because of this plague, the Mongol Empire collapsed in Central Asia. It may also be true that because so many people had died in Europe, the survivors were richer and better fed, and that this led to the Renaissance.

Learn by doing: visit sick people in a hospital
More about the bubonic plague

Bibliography and further reading about the bubonic plague: