By 1200 AD, the Mongol and Turkic people of Central Asia had pretty much finished pushing the Indo-Europeans out of power in Central Asia and West Asia, and had taken over ruling the whole area.

Who were the Indo-Europeans?
Central Asian history
All our Central Asia articles

Who was Genghis Khan? 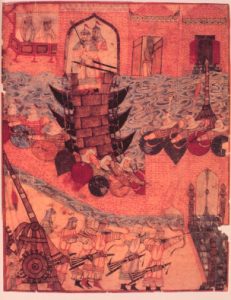 The Mongols besiege a city in West Asia

About 1180 AD the Mongols elected a new king, Genghis Khan (Khan means king), who was very ambitious and energetic. He soon formed alliances with the Turkic groups near him, so that he ruled both the Mongols and the Turks. He then had to fight against other Mongols who wanted to rule. But by 1206 AD he had gotten control of all of them.

Like earlier Persian and Chinese rulers, Genghis Khan then reorganized the Mongol army to be more professional. He issued a new law code, announcing his intentions to rule as the emperor of a civilized state, not the leader of clans and families as before.

Who were the Uighurs?
And the Kyrgyz?
History of the Khitan
History of gunpowder 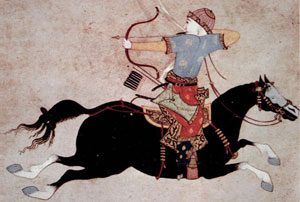 Then Genghis Khan led his army against other states. Again like Cyrus, Genghis Khan used new battle methods. His soldiers were better organized and trained than those of his enemies, and they used more advanced equipment, including gunpowder. By 1209, he controlled the Uighurs, the Kyrgyz, the Khitan, and all the other small kingdoms of Central Asia.

After Genghis Khan, then what?

Genghis Khan died in 1227 AD, and left his empire to his third son, Ogedei. Ogedei made alliances with the Song Dynasty to get control of northern China from the Jurchen in 1234. He and his sons and grandsons expanded his empire to include Kievan Rus to his west and Iran to his south. By 1241, the Mongols conquered Poland and Hungary.

Toregene and Fatima rule the Mongols

Ogedei died from drinking too much wine in that same year, 1241 AD, when he was 55 years old. Ogedei’s widow, a Christian woman named Toregene, took over ruling the Mongol Empire. Toregene’s main assistant was also a woman: Fatima, a Persian Shiite woman.

Who are the Shiites?
Who were the Seljuks?
Christians in Central Asia

Toregene and Fatima built churches, mosques, and schools all over the Mongol empire. Torogene’s generals attacked and looted Song Dynasty China, and won the battle of Kose Dag over the Seljuks and the Romans in 1243.

Kublai Khan – the Mongols in China