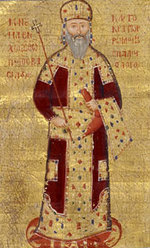 The last dynasty of Byzantine emperors

The Palaiologi were the last dynasty on the throne of the Roman Empire, from 1204 to 1453 AD. At first they did pretty well. They made a good alliance with the Italian city of Genoa, and together the Byzantines and Genoa dominated the Mediterranean Sea in the 1200s AD.

But under the direction of the Palaiologi, the Empire gradually lost its few remaining possessions: mainly Thrace and Greece. For the most part this was not the fault of the Emperors. The Ottomans were attacking the Byzantines much more strongly than they ever had before.

This was because the Ottomans had lost a lot of their land in the east to the Mongols, and they were trying to make up for it by capturing land to their west. These conquests were part of a larger trend during the Middle Ages for the Indo-Europeans to lose territory, and Turkic and Altaic speakers to take over more land.

In addition, a terrible bubonic plague came from the Mongol Empire in the 1300s and killed thousands of people in Constantinople and the Byzantine Empire. Finally in 1453 AD the Ottomans conquered Constantinople. From then on, it was the Ottoman Sultans that carried on the old Roman empire.

Learn by doing: play a plague game
More about the Ottoman Empire