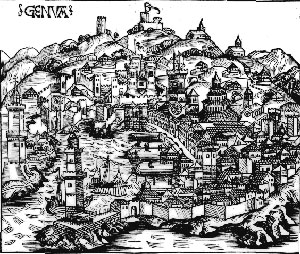 Republic of Genoa: Medieval drawing of the city of Genoa, Italy (1493)

Genoa in the Early Middle Ages

Around 900 AD, the Holy Roman Empire began to lose control of Italy, and Genoa was among the Italian cities that got their independence about this time.

Holy Roman Empire
The Fatimids
All our medieval Europe articles

Genoa became one of the first medieval cities where citizens won some political rights. Genoa’s independence started badly when a Fatimid fleet burned and sacked the city in 934 AD.

But the people of Genoa quickly rebuilt the town. Soon Genoa was trading with the Fatimids and getting rich buying silk, paper, steel, cotton, and sugar and selling them to Europeans. In return, Genoa sold European wool cloth, perfume, wine, furs, silver, and gold to the Egyptians.

The Counts of Canossa 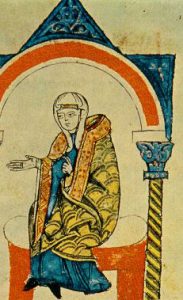 In the 1000s, Genoa fell under the control of the Counts of Canossa. But once Matilda of Canossa died in 1115, Genoa was independent again.

Soon the Republic of Genoa had one of the largest navies in the Mediterranean Sea. Genoa used those ships to conquer nearby towns. Through the Middle Ages Genoa controlled Sardinia, Corsica, and a number of other places as well as the area around Genoa itself.

The First Crusade
The Second Crusade

During the early Crusades, Genoa also conquered some land around Jerusalem, in Greece, in Sicily, and in North Africa.

In theory, Genoa remained inside the Holy Roman Empire, and the Christian bishop ruled the town. Really, the men of Genoa elected two consuls every year to run the city, as in ancient Rome.

As in the Roman Republic, most political power soon fell into the hands of a few powerful families. Men stopped women from voting, but women in the leading families could get some political power anyway. 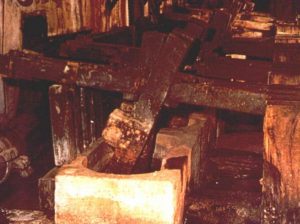 More about republics
Women in the Middle Ages

Genoa did very well in the 1200s thanks to an alliance with the Byzantines. Together Genoa and the Byzantines defeated Pisa and Venice, and dominated the Mediterranean. But when the bubonic plague – the Black Death – reached Genoa in 1347, many people died, and Genoa became much weaker.

In the late 1300s Genoa lost her overseas land to the Ottoman Empire and other states, and eventually came under the control of the city of Milan.

The Ottoman Empire
History of cotton
Oranges and lemons

Genoa’s people looked for new ways to make money. They expanded paper-making factories to replace the Egyptian paper factories that collapsed after the plague. Later, by around 1450, people started to grow lemons and cotton. Genoa’s great sailors began to look elsewhere for their fortunes – one of these was Christopher Columbus, a native of Genoa who sailed to North America from Spain in 1492. They were looking for gold, but also for warm sunny places where they could grow cotton and sugar. They found those places in the Caribbean and Brazil.