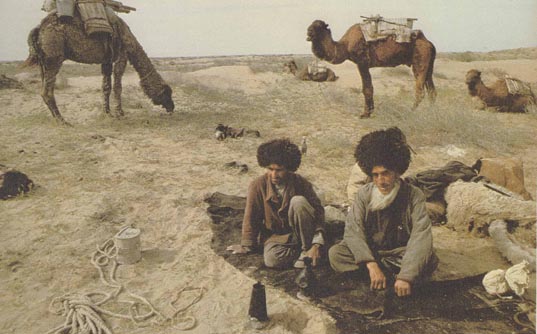 Turkomen on the Silk Road with camels

Just like under Persian or Sassanian rule, the economy of West Asia during the Islamic period depended very heavily on trade. The Silk Road ran right across the Islamic Empire. It reached east from China, to Tajikistan, to Uzbekistan, to Iran, to Iraq and Syria. Then it ran west to Lebanon, to the Byzantine Empire, and across the Mediterranean to Italy. Arab and Iranian traders, like earlier Indian traders, also sailed around India to the Chinese port of Guangzhou, carrying trade items on their ships.

Traders brought things from all over Europe and Asia to the Islamic Empire. From China, they brought silk for fancy dresses, paper, furs, lacquerwork, porcelain, and jade. And from Central Asia, they brought horses and peaches and steel and oranges. North from India, traders brought cotton cloth, glass beads, cinnamon, black pepper, and sugar. From Africa, traders carried gold and ivory. Eastward from the Mediterranean, it was wool cloth and silver. 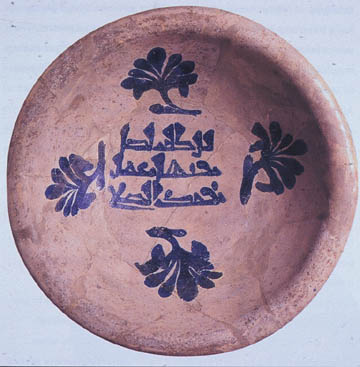 In return, the Islamic Empire made and sold things to everybody else. Mostly people there made the same things they had been making in Roman and Sassanian times: glass, knotted rugs, cotton cloth.

But people also developed new industries. Sometime around 650 AD, people in the Islamic Empire began to farm silkworms and weave their own locally made silk cloth. By about 750 AD, people living under the Abbasid Empire were beginning to grow sugar cane and make sugar to sell. They figured out how to make white glass pottery glazes to imitate Chinese porcelain. Not long afterwards, they were making paper from the cotton they grew, too.

Around 800 AD, Islamic food scientists bred wild carrots to create a purple carrot that sold well. A hundred years later, they bred the citron with the bitter orange to make the world’s first lemons. About 1000 AD, West Asian blacksmiths also learned how to make steel from steel manufacturers in India and Central Asia. This allowed West Asians to make steel for themselves instead of buying it on the Silk Road. So steel weapons and steel tools became cheaper than before, and the Mamluks and Seljuks had good swords and armor.

Silk Road trade expanded even more with the Mongol conquests of the 1200s AD. The Mongols helped a lot by making one big empire out of China, northern India, West Asia, and all the land in between.

But even though Islamic people made a lot of money from trade, most people in the Islamic Empire were still farmers or herders. You couldn’t farm efficiently enough to feed very many people who weren’t farming, so most people had to farm. The Islamic Empire was great for farmers. Some of that money from conquering people and from trade went into building new irrigation systems and new canals that helped farmers get more out of their land. And the money from trade also helped farmers get through a bad year, or even a lot of bad years in a row.

In the late 1400s AD, Portuguese explorers figured out how to sail around Africa and get to India. Even though it was a long trip, it was profitable because the Portuguese traders didn’t have to pay the middleman traders in the Islamic kingdoms. Soon most of the trade between China and India and Europe went by sea, around Africa, instead of over the Silk Road through West Asia. This was good for Europe, but very bad for West Asia.

Bibliography and further reading about the medieval Islamic economy: