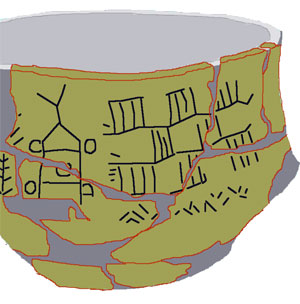 Central Asian science: A clay pot with a drawing of a wheeled cart from what is now Poland, about 3500 BC

What was invented in Central Asia?

Many of the world’s most useful inventions come from Central Asia: sewing, leather, cart wheels and spinning wheels, burning coal. And then also the compound and recurve bows, saddles and stirrups, and high quality steel.

A lot of important knowledge comes from Central Asia too: that some diseases are contagious, what causes fevers, and astronomical observations.

Central Asia was a clearinghouse for new ideas

In addition, people in Central Asia often talked to people from West Asia, Europe, and China, so they could bring together inventions from all over and combine them in new ways.

When did they invent sewing?

The earliest invention that we know of from Central Asia was sewing. People in Central Asia probably started to sew clothes about 45,000 BC, and invented sewing needles about 40,000 BC. Probably around 5000 BC, they invented leather.

(More about the history of leather) 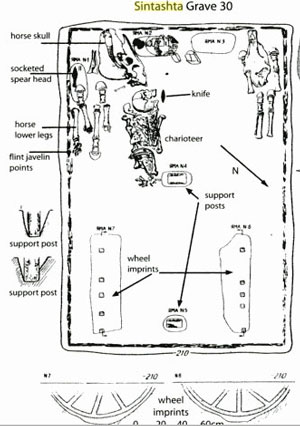 When did they invent the wheel?

About 4000 BC, people in Central Asia domesticated the horse. Then three hundred years later, they put wheels on sledges to make carts for the horses to pull.

They made these first wheels out of solid wood, which may have seemed more convenient in the north where there were more trees, and on the flat grasslands where a cart could move more easily. Soon people in West Asia and China started to use wheeled carts too.

Scythians – and maybe other Central Asians too – used marijuana as a medicine, and to relax. They built a ring of stones for a fireplace, and then set up a small tent of wooden poles and woolen mats over the fire, and threw weed on it and breathed in the smoke. (We know about this from Herodotus, and also from archaeological finds.)

The history of hemp
Archaeology and marijuana

When people in Central Asia started riding horses, about 2500 BC, they also invented the compound bow, a kind of bow and arrow that was shorter, so you could shoot it while you were riding your horse. Around the same time, they also domesticated camels to ride.

(More about the history of camels) 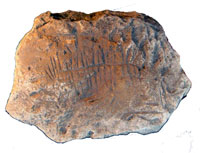 Sundial from Ukraine (ca. 1300 BC) – one of the two oldest sundials in the world

By 2000 BC, the people of Central Asia could make better wheels: they invented the spoked wheel. Wheels with spokes were stronger and lighter and used less wood than solid wheels.

Again, this new invention spread quickly south to China, and then with the Indo-Europeans to Greece and Italy and even further south to Egypt, West Asia, and India.

Around 1500 BC, people in Central Asia – possibly the Sogdians – started to burn coal to keep their houses warm.

(More about the history of coal)

They probably used coal to melt copper and tin together into bronze, too. Tin was common in what is now Afghanistan, and so Central Asia was a good center for metal-working.

The recurve bow, saddles, and stirrups

Sometime around 1000 BC, Central Asian archers invented the recurve bow. This bow was shaped like a W, and it was shorter, but it could shoot further. Recurve bows were easier to use while you were riding your horse. 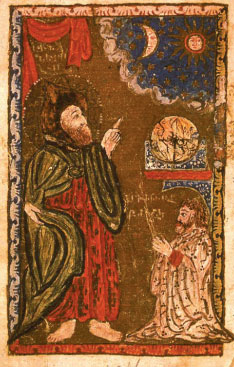 Once the Silk Road connected Central Asian traders with China and West Asia (and Europe), Central Asians got much richer than before – rich enough to pay for great libraries and universities.

The scholars at these universities invented many new things. The most important was crucible steel, a better kind of steel, harder and more flexible.

(More about the history of steel)

Doctors and medicine in Central Asia

These scholars also worked on improving medicine. As early as the 400s BC, a doctor did surgery on a man’s throat at Subashi in what is now western China and stitched the wound shut with horsehair.

A thousand years later, Ibn Sina understood that diseases like smallpox were contagious, and al Razi showed that fever was not a sickness, but the body’s reaction to sickness.

The Armenian doctor Mkhitar Heratsi encouraged doctors to keep patients in quarantine to keep diseases from spreading, and discouraged bleeding patients. Like Maimonides at the same time, Mkhitar thought clean air, good food, and exercise were the foundations of health.

Although many Central Asian inventions have to do with horses, by the year 1000 AD Central Asian people were also using boats, and Russian boat-builders invented an early ice-breaker boat, the koch. The koch had a rounded body under the water so it wouldn’t be wrecked if it hit ice, and also had ice-resistant wood planking at the waterline. 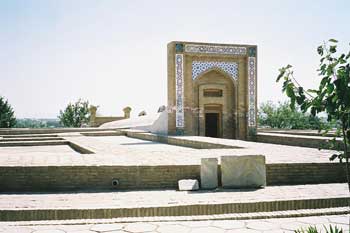 In the later Middle Ages, under Mongol rule, Central Asian scientists started to do  a lot of good astronomical observations.

In 1256 AD, Nasir al-Tusi convinced Hulegu Khan (a grandson of Genghis Khan) to build him a big observatory in Azerbaijan.

That’s where al-Tusi first saw that the Milky Way was made up of thousands of stars.

With this sextant, Ulugh Beg made a list of 994 visible stars. That was more stars than anyone else had ever seen, and with more precise locations than ever before. Ulugh Beg was also able to figure out how long it took the earth to go around the sun, with an accuracy to within 58 seconds.  He also measured the tilt of the Earth’s axis at 23.52 degrees, which was more accurate than anybody else had ever done. To make these calculations, Ulugh Beg also calculated trigonometric sine and tangent tables accurate to eight decimal places.

Learn by doing: create your own sundial
Central Asian Science after 1500 AD