History of leather – Skins and shoes 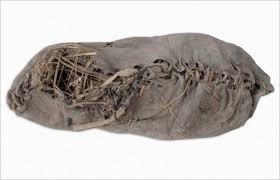 Areni-1 shoe from Armenia in Central Asia, about 3500 BC

People make leather from the skins of animals. You can make leather out of the skin of any animal, but cows and bison have the thickest skins to make the strongest leather. People also used deer skin or pig skin.

Where do cows come from?
How about bison?
History of clothing

After the shepherd or the butcher killed the animal, they skinned the animal. Then a tanner (someone who makes leather) made the skin into leather. In some cultures it was mostly men who made leather. In other cultures it was mostly women. There were a lot of different ways of making leather. First you scraped all the flesh off the leather with a bone or stone scraper (later on, people might use metal knives).

From rawhide to leather

For most of the Stone Age, people just dried that skin and used it as it was – we call that rawhide. By about 5000 BC, though, people in Central Asia started to process the skin with chemicals to make it softer. The earliest known leather is a shoe from Armenia, between the Black Sea and the Caspian Sea, from around 3500 BC. This was the home of the Yamnaya, the Indo-Europeans.

Central Asian clothing
Who were the Yamnaya? 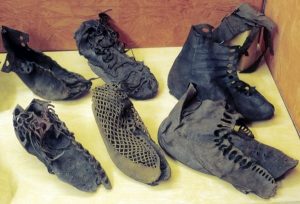 Leather shoes from the Roman fort of Vindolanda in northern England, around 400 AD

What chemicals did tanners use?

Sometimes people used salt. Some people used tannin, a chemical made from tree bark, or animal fat. Some people smoked the leather over fires made from green branches, or used powdered alum. A lot of people used urine (you know, pee!). Tanners (people who made leather) would go around and collect urine from public toilets and from peoples’ houses and take it back to their store in jars.

They would let the urine stand around in the jars for a week or so until it turned into ammonia, and then they would pour the ammonia on the leather to cure it (to make it into leather). This made tanners and tanners’ shops smell terrible, and mostly they were outside of town, right on the edges of towns, where people wouldn’t have to smell them so much. 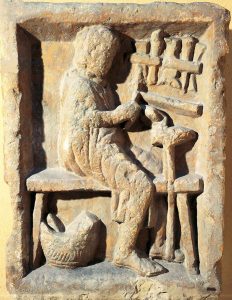 Leather-making spread from Central Asia south to West Asia and North Africa, where the Sumerians and Egyptians used it about 3500 BC, and west to China, where Stone Age villagers also used leather. Soon people were using leather in Europe, India and southern Africa too.

From leather to wool and linen

Before people began to spin wool and flax into cloth, they made more of their clothes out of leather and furs. At the end of the Ice Age, though, many big animals became extinct. There must have been a shortage of leather. People started to make clothes out of wool and linen instead. Once they began to have wool and linen cloth, they didn’t need leather as much for clothes, but they still used leather for shoes, and for many many other things.

What did people make from leather?

But people also used leather for lots of things that we don’t use it for today. They didn’t have plastic, and metal was very expensive, and glass and pottery were too breakable. People used leather bags to carry water and wine. They used leather strings to tie up their hair. Sometimes people used sheets of leather to cover doors or windows, or even as paper to write on. 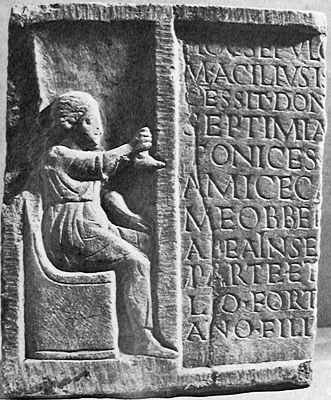 Learn by doing: what do you use that is made of leather?
More about ancient clothing
More about medieval clothing

Bibliography and further reading about leather:

From Cow to Shoe, by Ali Mitgutsch (1981). Easy reading, translated from German.

Leatherwork, by Sylvia Grainger (1976). Lots of projects to do with leather.

Studies in Ancient Technology: Leather in Antiquity – Sugar and Its Substitutes in Antiquity – Glass, by R. J. Forbes (2nd revised edition 1997). Only part of the book is about leather, but it will tell you everything you need to know about leather in ancient Greece and Rome. By a specialist, for adults.