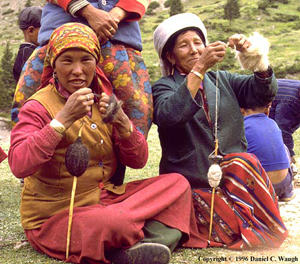 Around 1000 AD, the Mongols were still wearing mostly hemp clothing like the earlier Scythians. But in addition to their tunics, the Mongols sewed the hemp into long jackets that overlapped in the front and tied at the waist like a bathrobe.

By the 1200s AD, the Mongols had invaded India and China, where they learned about cotton and silk clothing. Cotton was lighter and more flexible than hemp, and not so scratchy to wear; silk was even more comfortable, but very expensive. After that, while some Mongol clothes were still made of hemp, others were made in the same style, but of cotton or silk. 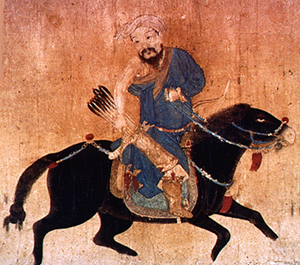 Underneath these jackets, Mongol men, like earlier Scythian men, still wore hemp or cotton pants, tucked into felt or leather boots. In winter, men wore fur vests, short fur capes, and fur-lined leather, hemp, or cotton hats. Or they wore long strips of hemp or cotton cloth wrapped around their heads as turbans. 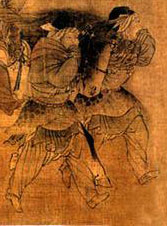 Mongol women dressed pretty much the same as Mongol men, including wearing pants under their tunics so they could ride horses more easily. They didn’t generally wear dresses, except sometimes for major ceremonies like weddings.