Who were the Scythians? Central Asian history

The Scythians were a large group of loosely connected people who lived in Russia. They also lived further south around the Black Sea and the Caspian Sea.  Like the Hittites, the Greeks and the Germans, they were Indo-Europeans.

Powerful in the Iron Age 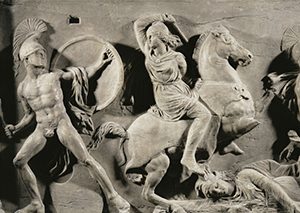 Scythians and the Silk Road

Maybe inspired by the success of the Parthians in invading Iran, the Scythians also began attacking people south of them, and about 150 BC they conquered the Sogdians (in what is now Afghanistan). As military leaders of the Sogdian traders, the Scythians got very rich from Silk Road trade.

Defeated by Turks and Mongols

The Scythians kept control of the northern Silk Road routes until around 200 AD, when another very similar group, the Sarmatians, overran them and took over their territory, and control of the Silk Road. But soon after that, beginning about 300 AD, the Indo-Europeans in Central Asia began to lose ground to Turkic and Mongol speakers like the White Huns. Although descendants of the Scythians and the Sarmatians still live in that area (modern Georgia and Ukraine) today, by 1500 AD the rulers of Central Asia were Turks and Mongols. 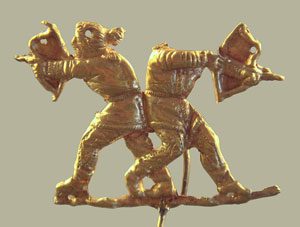 Scythian history: Two hunters with bows (Kerch, on the Black Sea, ca. 400 BC)

Herodotus and the Scythians

A lot of what we know about the Scythians comes from the Greek historian Herodotus. He wrote a long description of Scythian religious rituals, lifestyles, and principles as part of his history of the Persian Wars. Herodotus wrote in the 400s BC. Herodotus tells us that the Scythians liked to make drinking cups out of the skulls of their enemies. But Herodotus is trying to show how the Greeks are more civilized than the barbarians (which explains why the Greeks won the Persian Wars). So he naturally tends to emphasize the Scythians’ bloodiest traditions.

He also tells us a lot of more ordinary stuff: Scythians were afraid of the water but they liked saunas; they carried cups hooked on their belts; they liked to inhale marijuana smoke, and Scythian women sometimes fought in their wars.

Learn by doing: try a sauna yourself
More about the Indo-Europeans

Bibliography and further reading about the Scythians:

Beyond Celts, Germans, and Scythians: Archaeology and Identity in Iron Age Europe, by Peter Wells (2001). A short discussion of the problems with labelling other people “Scythians” and so on – what does that mean? Is anyone really a “Scythian”? Raises a lot of good questions.

Scythians and Greeks: Cultural Interaction in Scythia, Athens, and the Early Roman Empire, by David Braund and others (2004). Tries to answer some of these questions, with essays by a number of different specialists including some who are themselves from Ukraine and Georgia.

The First Horsemen, by Frank Trippett (1974). A Time Life book, now pretty out of date.

The Indo-Europeans
The Persians
More about Central Asia
Quatr.us home