A story from the historian Herodotus: Stone statues of Kleobis and Biton

Who was Herodotus? People sometimes call Herodotus the “father of history.”

Herodotus was the first writer that we know of (probably really the first) who tried to (in his own words) find out what had happened in the past “so that what people did will be remembered later, so that the great and admirable monuments that the Greeks and the barbarians made would be famous, and, among other things, to write down the reasons why they had a war.”

Why did the Greeks call people barbarians?
More about the Bible

The Bible was written a little earlier, in the 500s BC, and parts of the Bible are pretty much history books, but the Bible explains everything by saying that God wanted it, and Herodotus tried to explain what happened by looking at people’s reasons for making their choices.

The historian Herodotus was born around 485 BC in Turkey, in a Greek town called Halicarnassus. Like other writers of his time, Herodotus was from a rich family, and always had plenty of money himself. He was able to go to school, and he learned all the works of Homer as a boy.

The most important thing that happened while Herodotus was a child was that the Persians and the Greeks fought a war.

The Persians conquered Herodotus’ own hometown of Halicarnassus shortly before he was born, but when the Persians attacked Athens and Sparta, in mainland Greece, the Greeks defeated them.

The story of the Persian Wars

Everybody was surprised that Athens and Sparta had been able to defeat the Persians, and when Herodotus grew up he devoted his life to trying to explain how this had happened. 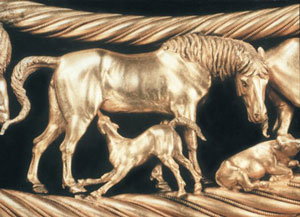 Scythian horses (400-200 BC). Herodotus visited the Scythians and wrote about them.

Herodotus decided that the main point was that the Persians were ruled by a king, and the king had too much power.

This led the king to think he was able to control things that really only the gods could control, like the weather, or who won a war. Pride, says Herodotus, goes before a fall.

He suggests other causes for the war, too. He hints that the war was partly about trade and money, and partly about people’s fear of anyone different from them.

So Herodotus thought that the Greeks could learn a lot from the people around them. So Herodotus wrote a lot about other cultures that he visited, like the Egyptians and the Scythians. And he also wrote about places he had never been, like India and East Africa.

Often Herodotus got things wrong. Sometimes he didn’t really understand what he saw in another country. Sometimes people told him things that weren’t true. But a lot of what Herodotus says is certainly true.

Learn by doing: write an explanation of why something happened in your own life: why your team won the game, or why you decided to do something
More about the Persian Wars

Bibliography and further reading about Herodotus:

The Persian Wars, by Herodotus. Straight from the Greek historian himself

Herodotus: And the Explorers of the Classical Age, by Ann Gaines (1993). Easy reading.

Or check out the Herodotus article in the Encyclopedia Britannica.