Who was Homer? Greek epic literature 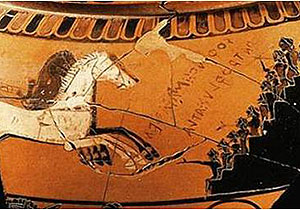 Cup by Sophilos, showing a race from the Iliad by Homer (as the inscription says – Athens, ca. 570 BC)

Why is Homer important?

To the classical Greeks, Homer’s epics played very much the same role that the Bible plays for a lot of people today. People memorized big chunks of the Iliad and the Odyssey in school, and they repeated bits of it in order to convince other people to do something or think something.

The Iliad
The Odyssey
Greek literature
All our ancient Greece articles

When did Homer live?

Homer lived around 700 BC, in the Archaic period in Greece. Nobody knows where in Greece he lived. People said he was blind, but poets were often said to have been blind, so this might not be true (people say poets are blind because they think that being blind helps the poets to “see” things other people can’t, like to know what the gods are doing).

Homer and the alphabet

When he was born, the Greeks had just recently learned how to use the alphabet from the Phoenicians or Carthaginians. He used the alphabet to write down two long epic poems called the Iliad and the Odyssey.

The Greek alphabet
Who invented the alphabet?

Where did these stories come from?

Probably he didn’t make up these stories, or even the words, himself. Some of the stories are descended from earlier Hittite or Akkadian or Sumerian stories.

Poets or bards had been going around Greece telling these stories (and probably accompanying themselves on the lyre) for hundreds of years already. But Homer wrote them down in Greek. Probably he also did a lot of work on them, to make them as good as they are.

Bibliography and further reading about Homer:

The Life and Times of Homer, by Kathleen Tracy (2004). Easy reading.

The Odyssey of Homer (Oxford Myths and Legends), by Barbara Leonie Picard.